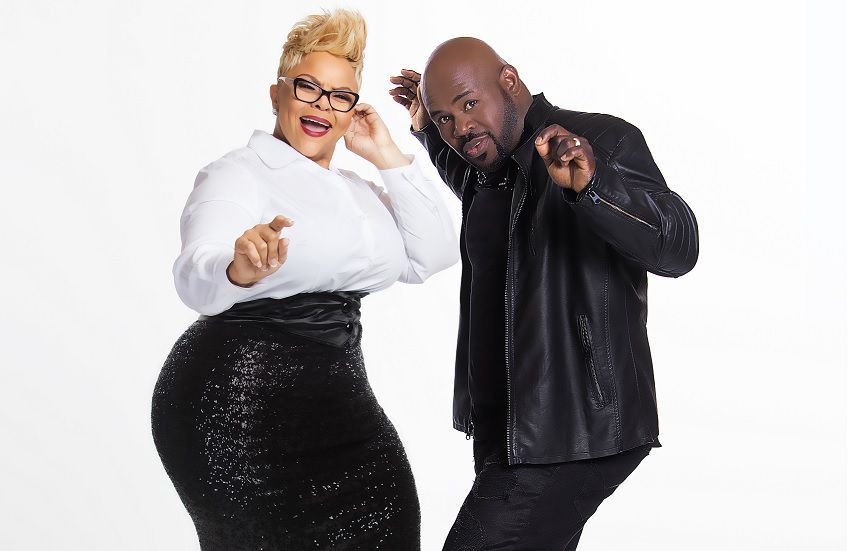 TV One has announced that production is underway in Atlanta for the new original holiday movie, MERRY WISH-MAS. Starring Tamela Mann  (The Manns) as Keneisha ‘Kenni’ Wright, a single and successful Atlanta businesswoman who hasn’t returned home for the holidays in years, she plays opposite her creative and life partner, husband David Mann (The Manns) as Jessie Jenkins, an old high school friend. The two reunite at Jessie’s fledgling wellness facility, the Beverly Living Center, where Kenni is reminded of the transformational power of love, hope and faith, amplified by the spirit of the holidays. The Manns also serve as executive producers on the project, which will premiere this winter on TV One.
Directed by award-winning actress, director and producer Terri J. Vaughn, this feel-good romantic comedy revolves around Kenni, who has avoided the annual holiday trip to her hometown of Columbia, South Carolina for years. While she is hoping for the best, as with any family, there are unresolved issues lingering that could make the holiday not so bright. The movie also stars veteran actress Kim Fields (Living Single)as Celine, a regular at the center who loves seeing the new smile Kenni puts on Jessie’s face, but is protective about his feelings. Towanda Braxton (Braxton Family Values)plays the role of Natalie, the persistent local woman who has a crush on Jessie. Elizabeth Omilami  (Madea’s Family Reunion) appears as Kenni’s matchmaker mom Regina, while Chrystale Wilson  (The Player’s Club) steps into the role of Kenni’s sister and food truck entrepreneur Dionne, adding a high dose of sibling rivalry. Rap artist Yung Joc, best known for popular singles “It’s Goin’ Down” and “I Know You See It,” makes a cameo appearance.
“Heartwarming stories like Merry Wish-Mas that bring families together and make us laugh are as much a part of the season as Christmas trees and Santa himself,” said Vaughn, who makes her TV One original film directorial debut. “And this movie, touching upon family conflicts, singlehood and love, money woes, and wishing for Christmas miracles, is set to become a highlight of the coming holidays.”
Written by Cas Sigers-Beedles, Merry Wish-Mas is executive produced for TV Oneby Roger Bobb and Angi Bones (Bobbcat Films), and Terri J. Vaughn and Cas Sigers-Beedles (Nina Holiday Entertainment). David Mann and Tamela Mann also serve as executive producers. George Pierre serves as Casting Director. For TV One, Tia Smith is Executive in Charge of Production and Sr. Director of Original Programming and Production; Donyell Kennedy McCollough is Sr. Director of Talent, and D’Angela Proctor is Head of Original Programming and Production.