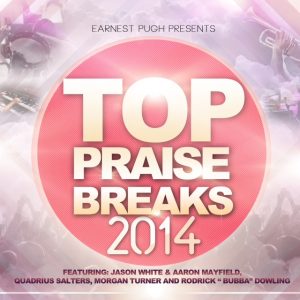 Dove and Multiple Stellar Award Nominated vocal powerhouse Earnest Pugh is well-known for giving God a hearty praise in his own music and his live concerts but now he’s bringing some other electrifying praisers to the public’s attention with a soul-shaking new CD “Top Praise Breaks” that is due in retail stores and digital platforms on July 8th. The first radio single “Pentecost Fire” by Jason White & Aaron Mayfield will be serviced to gospel radio within two weeks.

The ten-song set features the sweat-inspiring praise breaks such as John P. Kee’s bassist Morgan Turner’s “Spirit of David” and Pugh’s own music director Rodrick “Bubba” Dowling’s “To God Be The Glory Praise.” There is an assortment of other contributors showcasing how the styling of the praise breaks changes geographically. There’s the Washington, D.C. area’s Quadrius Salters on the “Holy Ghost Shout Box” and Walt Burger’s “Columbus Ohio Bump.” The project is rounded out with a bonus eleventh track entitled “Step Right In” by Earnest Pugh and Michelle Prather. The track was co-written and produced by Grammy Award winning producer Cedric Thompson who’s worked with the likes of Donald Lawrence, Karen Clark Sheard and Bishop T.D. Jakes.

Why an album devoted to praise breaks? “It was at my live recording for the CD “A Worshipper’s Perspective” in 2006 that I saw the power of God move during a praise break,” Pugh recalls. “I recall the people being at such a level of high praise until my production team and I literally had to ask them to take their seats because we knew the cameras were rolling and we wanted to be out of that building at a certain time but it was as though the Holy Spirit refused to leave the room. My music director looked at me and said, `Let God have his way…’ Needless to say the praise break was the highlight of the recording and set the tone for the rest of the recording. From that day forth I vowed to always pause for the cause and render a praise break.”

“This CD will give musicians and worship leaders a tool that can be used when their services shift from worship to praise or vice versa,” says EPM Music Group President Keith Williams.  “The CD will showcase a variety of approaches to the praise break from the West Coast style to the East Coast vibe.”

“Pugh is a very out-of-the-box leader who comes up with creative and innovative ideas that are unprecedented,” says EPM Music Group A&R Director Gerald Jones. “This project is no exception.  I am very optimistic about marketing this project because its never been done before in the gospel music industry.”