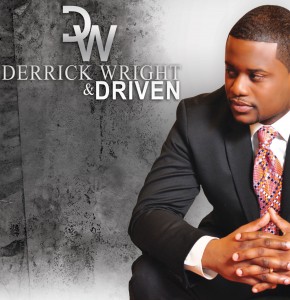 Derrick Wright has been surrounded by music all his life.  The son of the late gospel legend, Rev. Timothy Wright, remembers walking into his living room seeing artists like Kurt Carr and Hezekiah Walker singing with his father.  Now, the renowned drummer returns to his gospel roots with the debut release of Derrick Wright & Driven.

Wright’s new project is a collection of gospel cuts and remakes.  He even revamps some of his father’s popular songs.  “Master Can You Use Me” is given a contemporary twist with the vocal stylings of gospel powerhouse singer Melonie Daniels.  Also, “You Are My Everything”, another Rev. Timothy Wright classic, is covered by the younger Wright.  Wright also brings in famed gospel star Cheryl “Pepsi” Riley as guest vocalist on “It Will Be Alright”.  Additional tracks include “More of You” featuring Jeff Roberson and “Fly Away” featuring Bettina Pennon.  The full release is available on iTunes.

Hailing from gospel music royalty, Derrick Wright is set to continue the legacy of the gospel music heavyweight.  A gifted and talented musician in his own right, Derrick Wright has the musical Midas touch.  Currently, the Co-Music Director and Drummer for mainstream GRAMMY Award-winning pop artist Adele and Drummer for GRAMMY Winner and R&B sensation Toni Braxton, Wright is known as a musician’s musician.  But even with his amazing talent, he was not able to escape life’s challenges.  With the sudden death of his mother and nephew and subsequent passing of his father, Wright experienced unimaginable grief.  His faith was the only thing that brought him through.  Never straying from his gospel roots, the debut gospel self-titled record Derrick Wright & Driven is a collection of moving and inspirational gospel cuts.  The project not only celebrates the unshakable faith of the artist, but carries the torch of the Wright family, known for delivering timeless and riveting gospel songs.

It was his father’s inspiration that helped him to name the ensemble, Driven. “After my mother died, my father planned her funeral from his hospital bed,” recounts Derrick.  “People would come to encourage him and he would end up encouraging them.  My father was always pushing; he was driven.  I have taken that drive and used it in my life.”  The nine singers are friends and all have been through trying times, but each one has a testimony as well.  The group is purpose-driven and has no problem giving God all the praise.  The ensemble dropped their debut release in 2011 to rave reviews.  Derrick has recently been covered in Essence, JET and Sister2Sister Magazines.  More information about Derrick Wright and Driven can be found at www.DerrickWrightAndDriven.com.