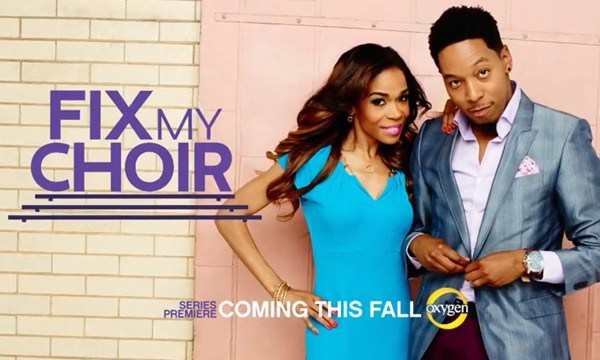 Oxygen Media is coming to the rescue of choirs across the country in the new music series “Fix My Choir,” premiering Wednesday, November 5 at 10 pm ET/PT. In this bold and uplifting series, struggling choirs get some much-needed mentoring from gospel superstar Deitrick Haddon (“Preachers of L.A.”) and Grammy Award-winning recording artist Michelle Williams of Destiny’s Child fame.

In each episode, Deitrick and Michelle travel to a different hometown to surprise a struggling gospel choir, community choir or other vocal group to help them find perfect harmony-not only in their music, but with each other. Together with an intervention and makeover, the choirs will ultimately have a chance for redemption.

Over the course of a week, the mentors dive deep into the members’ lives to tackle the choir’s core issues such as leadership, interpersonal conflicts, artistic direction, and doing whatever it takes to get these choirs back on track with a big sound and newfound confidence. Deitrick and Michelle will take these choirs to the next level of singing, collaboration, and presentation, all in an effort to make the ordinary extraordinary.

“The choir represents family, unity and team work,” said Deitrick Haddon. “It’s an honor to be a part of introducing the choir culture to the world with “Fix My Choir.”

(Michael Jones):               All right, my question is after working with different choirs from across the country,  what would you all say are the top three signs that a choir should realize that it’s time to fix this choir?

Michelle Williams:            That almost depends on, I guess, what the goal of the choir is.  I think what was so fun, like I said, working on this show, “Fix my Choir,” there were choirs from all different walks.  You know, but as far as three signs that a choir needs to be fixed, I would say just — when there’s consistent friction all the time.

Michelle Williams:            Yeah, when it can’t be solved with just, you know, pulling to the side.  I have a conversation.  I think that’s one when there’s consistent friction. Number two …

Deitrick Haddon:              … I think you’re on to something with that.  Number one was when there’s friction and there’s confusion.  Because whenever’s there’s confusion, you know you got to get in there and fix that, because that can destroy a choir, you know, really fast, when they’re …

Number two, I think when there’s a cycle, a repeated cycle like they can’t reach their goal, year after year, you look up, you have a goal, but then it’s 10 years later.  You’re still trying to have that — reach that goal.

So when the cycle is — when there’s a cycle that, I think that’s when you know the choir needs to be fixed.  So that’s number two.

What you think number three is, Michelle?

Michelle Williams:            And I was going to say the typical one, you know, where you might have the wrong people singing.  Or one of the things, is give other people a chance.  Stop picking the same people all the time to do something.  Give that choir a breath, you know, as far as letting different people lead a song, stuff like that.

Fixing the choir as far as too, just you know, I was at a church yesterday.  And the first thing I wanted to do, nowadays, these choirs think that everybody’s supposed to have an individual microphone.

Michelle Williams:            I said you got the wrong people with these microphones.  Oh, my — it was horrible.  Not horrible, but there was a few people that didn’t need to be on microphone.

Michelle Williams:            I’ll just say that.  I was just like I just wanted to get up there and fix them, but they were really sweet.  I would say the musical issue is trying to rearrange those who probably aren’t that vocally strong.  Because when you come into church you want to just — you want to be moved.  You want to have a great time and minister, too at the same time.

For me, that could be a distraction if not …