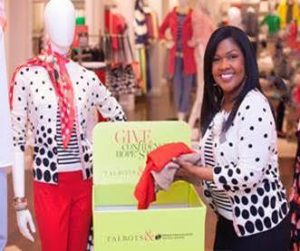 On the heels of her #1 Billboard charted release, Let Them Fall In Love, CeCe Winans uses her celebrity platform to bring awareness to a great cause.  Since charity starts at home, Winans recently visited Talbots’ Cool Springs Galleria location in Franklin, TN to make a clothing donation while sporting items from the new collection.

“I love the transformation that Dress For Success is doing in the hearts and minds of women around the world, and I’m honored to do my part along with Talbots and O Magazine to spread the good news,” says Winans.

O Magazine and Talbots teams up once again to release a second exclusive limited-edition capsule collection to benefit Dress for Success.  Last year, the partnership raised $1 million and collected over 4,000 boxes of clothing to support over 20,000 women. DSF a non-profit international organization that empowers women to achieve economic independence by providing a network of support, professional attire and career development tools to help women thrive in work and in life.

In addition to shopping the collection, customers can also give back in two other ways – by donating gently worn work attire from March 2nd to March 5th at their local Talbots or by making a monetary donation in store or online.

Join CeCe Winans and many others to get the word out by simply encouraging women to shop and donate, share on social, tweet about it, post about it, snap about it, talk about it, tell a friend, tell two friends, tag a friend or just scream about it from the rooftops we would be so grateful. Don’t forget to tag any social posts with @TalbotsOfficial, @OprahMagazine, @DressforSuccess, and include #TalbotsxOmag.

About CeCe Winans:
Winans has released a slew of duo and solo albums that crossed genres and boundaries and influenced a generation of gospel and secular vocalists. Her mantel today holds a staggering 10 GRAMMY Awards, 20 Dove Awards, and seven Stellar Awards. She’s been inducted into the Gospel Music Hall of Fame, the Hollywood Walk of Fame, and the Nashville Music City Walk of Fame, in addition to being named a Trailblazer of Soul by BMI and garnering multiple NAACP Image Awards, Soul Train Awards, Essence Awards, and more. She’s sold in excess of five million albums in the U.S. alone, topping the Gospel charts repeatedly while managing to cross over with smashes like “Count On Me,” her stunning duet with Whitney Houston from the multi-platinum ‘Waiting To Exhale’ soundtrack, which sold two million copies and cracked the Top 10 on the Pop, R&B, and Adult Contemporary charts. She touched millions more with inspirational performances everywhere from Oprah to The White House, and even showed off her acting chops on television series like ‘7th Heaven’ and ‘Doc.’ In 2016, Winans became a member of the Artist Committee for the prestigious Kennedy Center Honors.