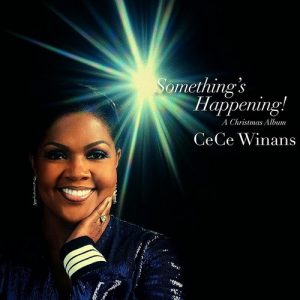 The calendar shows Autumn is in full swing, but Christmas is in the air and award-winning singer CeCe Winans gears up for her fourth holiday recording, Something’s Happening! A Christmas Album (Puresprings Gospel/ Thirty Tigers).   The 11 track musical delight features Christmas classics and new songs perfect for holiday gatherings and trimming the tree. The contemporary collection of compositions is available at iTunes, Amazon, Apple Music, Spotify, Pandora, Barnes & Noble and other music retail outlets.

Once again, Winans teams up with her son Alvin Love III, a Grammy winning producer, to deliver a smorgasbord of festive songs that will have listeners coming back for more each year.  Something’s Happening! A Christmas Album will no doubt be added to consumer’s holiday stash of favorites.  Alvin penned five new songs for this spirit-filled Christmas album, incorporating five classic tunes with a distinctive musical twist.  He went the extra mile and invited the Zagreb Philharmonic Orchestra conducted by Tim Akers and recorded at Vatroslav Lisinski Concert Hall in Zagreb, Croatia.

“We were inspired by the Christmas albums from the golden era of symphonic popular music. This album is grand in scale and spectrum. Each song is accompanied by a 75 piece orchestra and brings out a different color in CeCe’s voice, some colors will be familiar some will be new. It’s a big sound and we’re really proud of it”, says Alvin.

The melodious sound of “This World Will Never Be the Same” reminds listeners how much the world has changed, but gives us hope for a better tomorrow.  The whimsical, “Giving Season” paints a vivid picture of Christmastime and the spirit of giving while the classic, “Hark! The Herald Angels Sing” delivers familiarity in the beginning, but midway through the song the tempo changes to flavorful and rhythmic percussions.   In a festive contemporary seasonal carol, “It’s Christmas,” Alvin Love’s crafted tune will have you swaying and singing along.

Earlier this week Billboard Magazine premiered the single, “It’s Christmas” noting its’ upbeat, Motown-flavor that apparently had some musical influence on the Detroit born singer.  This is Winans’ first  solo Christmas album since the release of His Gift in 1998.

Winans is open to branching out musically and has this to say about the new album, “It’s been a long time. I just felt like I could do something that was better, something that was fresher. It was time to do a new one, and I’m pretty pleased with it. I think it’s fresh, and fun. I’m glad I did it.”

The vocals are masterful on this album and Winans doesn’t fail to seal her signature sound into each song.   From start to finish this album brightens the smile and lightens the heart, reminding us of the true meaning of season.   Something’s Happening!  A Christmas Album will make the perfect Christmas gift and stocking stuffer.