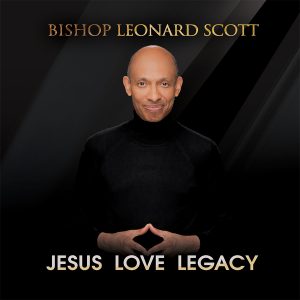 Veteran praise and worship recording artist, Bishop Leonard Scott, had a sudden health scare last Easter Sunday that made him reevaluate some things. He was about to read a scripture from the pulpit of the Rock Community Church in Indianapolis where he’s pastored for the last 20 years.  “The words on the page became indiscernible and I was unable to verbalize them,” he recalls. “I felt myself going down and had an out of body experience where I thought my life was ended. I remember saying to the Lord, `Well, I guess this is it for me.’”

It wasn’t over for Scott though. After he collapsed, within minutes paramedics had rushed him to the hospital and ran a battery of tests that showed no health problems. “After they released me, I asked the Lord what that incident was all about,” Scott says. “I was concerned that I might pass out again while driving or doing something else that could have detrimental consequences….That is when God spoke two words to me that were life changing. He said, “Trust Me.” I know I had read it numerous times in the scriptures, quoted it, proclaimed and preached it, but it had another significance when He spoke it into my spirit. It took my faith in God to another level. And that is what my new album, Jesus Love Legacy, is all about. It is songs about faith and trust in God.”

Jesus Love Legacy (Tyscot Records), is Scott’s 14th album and it releases globally on August 31st. The twelve-track collection of songs is arguably one of Scott’s most cohesive and intentional efforts. He collaborated closely with producer, Phillip Feaster (Synergy Music Group), and singer/songwriter, TIFF JOY. The trio co-wrote seven of the set’s twelve tracks, including the upbeat radio single, “Working in My Favor,” which features gospel legend Fred Hammond and R&B treasure, Shirley Murdock. Rance Allen and Kevin Vasser join Scott on the old school funk number, “Power in the Name.” TIFF JOY chimes in on the rousing praise and worship tune, “Here I Am.” There’s a simple and beautiful hymn medley of “I Surrender All” and “Draw Me Nearer.” Scott’s stellar performances on the Christian Pop track “Holy Spirit” and  ” Trust and Obey” are particularly spirited.

“Because of the accomplishments and legacy of Tyscot Records I have had several people who I regard as gospel icons tell me I am a legend,” Scott says. “And I get it. Because we have been instrumental in the careers of so many gospel greats and survived so many storms of adversity through the years, we are lauded for these accomplishments. But the truth is that I am nothing without Christ. Absolutely nothing. They say I have this legacy, but it is because Jesus has given me His legacy of love, and without that I could do or be nothing of eternal significance. Jesus is the real legend and the source of every legacy of any significance.”