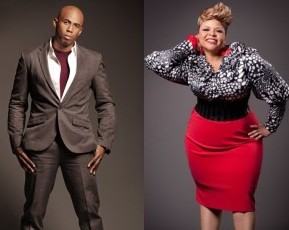 Billboard recently released its Year-End summary of Gospel albums and songs that ruled the charts in 2013. At the top of the lists are Anthony Brown and Group Therapy’s hit single, “Testimony”, which spent 62 weeks in the Top 30, with 46 of those weeks consecutively in the top 10. Tamela Mann’s album, “Best Days”, which is currently #1 on Billboard and features her hit song, “Take Me To The King”, is the #1 album of the year. As of today, “Best Days” has spent a total of 72 weeks and counting on the chart.

The remaining top 10 songs on Billboard’s Year-End Gospel Songs Chart are as follows: Israel and New Breed teamed up with James Fortune and Jason Nelson for the chart topping anthem, “It’s Not Over (When God Is In It)”, which is featured on his latest live project, “Jesus At The Center: Live”, for the #2 spot. Tamela Mann takes the #3 spot with her Kirk Franklin penned track, “Take Me To The King”. The year’s break-out artist, Tasha Cobbs, is #4 with her hit Worship song, “Break Every Chain”, which spent numerous weeks in the #1 spot.  Bishop Paul S. Morton returned to the Gospel music scene this year with his current album, “Best Days Yet”, which spawned the #5 song on the lineup, “Your Best Days Yet”.

After a melodramatic ‘situation’ with Gospel singer Deitrick Haddon, Isaac Carree came out on top this year when he released his uplifting single, “Clean This House”. The song’s sound is comparable to R. Kelly’s “Trapped In The Closet” and many were shocked to see the two artists team up for a remix to the tune. Thus, Carree’s “Clean This House” is #6 on the list. The current #2 song on Billboard is the #7 song on the Year-End list, Hezekiah Walker’s “Every Praise”, which peaked at #1 and spent a total of 40 weeks on the chart. Tye Tribbet released his live album “Greater Than” this year and it features his now fan-favorite song, “If He Did It Before… Same God”, which is #8 after spending 43 weeks on the chart and peaking at #3.

Concluding the Year-End Gospel Songs Chart is Legendary Singer Shirley Caesar with “God Will Make A Way” form her “Good God” album at #9 and James Fortune & FIYA’s collaboration with Monica and Fred Hammond, “Hold On” at #10. To see the remaining 50 songs that made the list click here!

The remaining top 10 albums on Billboard’s Year-End Gospel Albums Chart are as follows: WOW Gospel 2013, which features hit songs such as Kirk Franklin’s “I Smile”, Anthony Brown and Group Therapy’s “Testimony” and Pastor Charles Jenkins’ “Awesome”, takes the #2 spot after spending 48 weeks on the chart. Tasha Cobbs’ EP, “Grace”, debuted at #2 and spent 46 weeks on the chart. Cobbs’ “Grace” comes in at #3. Grammy Award-winning Gospel Rapper LeCrae shined in 2013 with his chart-topping album, “Gravity”, and takes the #4 spot.  Tye Tribbet made history this year when he recorded his live album “Greater Than” at two different locations, thus creating an amazing project that lands at #5.

Choir master Hezekiah Walker pleased his fans this year with his latest project, “Azusa: The Next Generation”, featuring his hit-single “Every Praise”. The album debuted at #1 and takes the #6 spot on Billboard’s Year-End list. Fred Hammond, Dave Hollister, Brian Courtney Wilson and Eric Roberson teamed up to form a Gospel super group, The United Tenors. Their debut, self-titled album is #7 on the list, but debuted at #1 upon its release. Following is Israel and New Breed’s live album, “Jesus At The Center: Live” at #8. The album debuted at #2 and is currently #20 on Billboard after 72 weeks on the chart.

Concluding the Year-End Gospel Albums Chart is Andy Mineo’s trendsetting “Heroes For Sale” at #9 after debuting at #1 and “The Evolution ll” by Larry Callahan and Selected of God at #10. To see the remaining 50 albums that made the list click here!