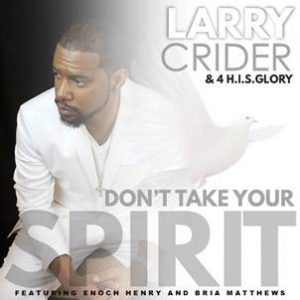 Gospel singer and ensemble leader Larry Crider is committed to lifting up the name of Jesus in song. An exceptionally gifted instrumentalist, Crider is a musician’s musician. As an artist and a member of his high school choir, he’s performed and shared the stage with artists like Karen Clark Sheard, Byron Cage, Vashawn Mitchell, Tramaine Hawkins, Shawn Bigby and Earl Bynum. He and his ensemble 4 H.I.S. Glory have been singing the praises of God for 4 years now. Since their formation, they have caught the attention of the Gospel music industry netting them award wins and nominations including a Best Choir of the Year Award at the 8th Annual Blockbuster Music Showcase Gospel Awards. Now the Nailed4U Music Group recording artist, Crider and the 13-member ensemble 4 H.I.S. Glory, have just dropped a new single called “Don’t Take Your Spirit”.

A reflective and heart-rending song, “Don’t Take Your Spirit” is a creation of Crider’s. The moving ballad was inspired from a psalm of David. Sung from the perspective of someone who is grappling with the fact that they’ve broken the heart of God, the track calls for repentance. It also finds the singer begging for God’s Spirit to remain. Accented by the beautiful harmonies by 4 H.I.S. Glory, the lead vocals of Enoch Henry and Bria Matthews make this a memorable song.

Crider’s transparency is clear in the tune as he encourages believers to keep God first. “The song was inspired during a time when I was doing the opposite of what God wanted me to do,” shares Crider. “We can get caught up in doing what we want to do. That’s what I did. I soon realized that the closeness I had with God wasn’t the same anymore. Eventually, I found myself crying out to God asking Him for forgiveness and – like David did in Psalm 51 – not to take His Spirit away. God told me that He hadn’t left me, but He gave me a taste of what it would be like if He did leave. That experience made me determined to be purposeful in living for God,” says Crider.

The group’s leader was bitten by the music bug early in life. He started singing in the youth choir. His passion for music morphed into playing piano and the drums. In school, he was a member of the concert band, marching band and the choir. It was in the Largo High School Choir, under the direction of Pastor and Gospel artist Jeremiah Murphy, that Crider embraced and honed his talent for singing. It was also there where he learned how to direct choirs, ultimately directing his church choir as well. After graduating from high school, he started working with other music ministries in the DMV. As his musical talents expanded, he also became a songwriter, composer and arranger.

His skill as a director encouraged him to start his first group. He formed 4 H.I.S. Glory in 2013; they include group members who are friends of Crider’s and people he had met in music ministry throughout the years. The goal of 4 H.I.S. Glory is to “live out the call and impact lives for the better through song”. The ensemble entered the Gospel music industry with the release of their debut EP, Time To Say Yes. The project was well-received in the artist’s local area. Included on the record was an older rendition of the new single, “Don’t Take Your Spirit”. The newly released single received a musical make-over with new production, a new arrangement and a new sound.

Larry Crider & 4 H.I.S. Glory have been recognized for their exceptional musical abilities several times. This year they received three Rhythm of Gospel Award Nominations: New Artist of the Year, Best Performance by Group/Duo and Contemporary Artist of the Year. They were also nominated for the 1st Voices of Gospel Music Awards for New Artist of the Year, Gospel Choir of the Year and Contemporary Artist of the Year. These nominations are in addition to their win for Best Choir of the Year Award at the 8th Annual Blockbuster Music Showcase Gospel Awards. Currently, Larry is the Choir Director and Musician at his home church, First National Deliverance Center located in Washington, DC. Previously, he served as Youth Choir Director at Largo Community Church in Mitchellville, MD for 10 years. Look for a new project from Larry Crider & 4 H.I.S. Glory soon.