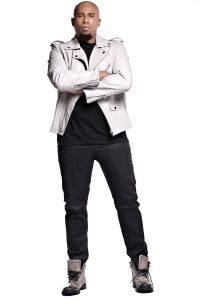 The Grammy® Award nominated gospel troupe, ANTHONY BROWN & group therAPy – best-known for their No. 1 hits “Worth” and “Trust in You” – have leapt into the Top Ten of the Billboard Gospel Airplay and Hot Gospel Songs charts with their Go-go-flavored urban inspirational single, “Blessings on Blessings” (Key of A Music/ Tyscot/ FairTrade).  It’s the group’s eighth Billboard Top Ten entry, climbing from No. 12 to No. 10 on this week’s Gospel Airplay chart while also muscling its way from No. 8 to No. 4 on the Hot Gospel Songs hybrid chart for the week ending July 6th.

The up-tempo track anchors the group’s forthcoming album, Second Wind (Key of A Music/ Tyscot/ FairTrade), which is tentatively scheduled for an October 2019 release.

Concurrently, a deep-club remix and music video of the song entitled, “Blessings on Blessings (The B.O.B. Bounce),” has introduced a fun, festive new Christian line dance – The B.O.B. Bounce – that has sparked numerous online challenge videos. The concept music video premiered on the group’s YouTube channel on June 21st and accumulated over 500,000 views in its first week. The feel-good jam and video are available on all major digital music service platforms at this link:  http://smarturl.it/BlessingsOnBlessings

ANTHONY BROWN & group therAPy is one of the leading acts in gospel music with millions of digital streams and numerous Top Ten hits such as the 2015 cut, “Worth,” which spent 24 weeks at No. 1 on Billboard’s Gospel Airplay chart. Along the way, they’ve picked up multiple Billboard Music Award and Grammy® Award nominations. They have also won an armful of Stellar Gospel Music Awards and a couple of Dove Awards too. Visit http://ajblive.com for more information.