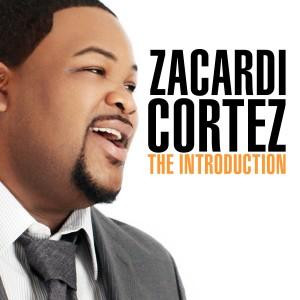 Since blowing up as the dazzling lead vocalist on James Fortune & FIYA’s 2008 breakthrough hit “The Blood” and their subsequent #1 smash, “I Believe”, Zacardi Cortez has gained a reputation in music circles as a singer’s singer as much for his intricate vocal gymnastics and fiery hoops as for his smooth tone. The Houston native can sing it all, from gutbucket blues to polished symphonic pieces and he displays it all on his forthcoming debut solo CD, “Zacardi Cortez: The Introduction”(Blacksmoke Media) that hits online and retail stores everywhere on May 22, 2012.

Cortez is rolling the new CD out with a hometown release concert Tuesday, May 22, 2012 @ 6:30 p.m. at the Community of Faith Church located at 1024 Pinemont Drive in Houston, TX. Admission is free. Gospel starlet Kierra Sheard will make a special appearance at the release concert as well.

With the buzz swirling around Cortez’ name over the last few years, it’s no surprise that a who’s who in music has signed up to croon with him on the 13-track CD. Lalah Hathaway duets with him on the smooth anthem “Every Promise” and Fred Hammond brings horn-driven funk to “Praise You.” James Fortune opens the soul-stirring ballad, “God Held Me Together.” The silky soul of “Alright” features Isaac Carree on a track that fits neatly between tracks by R. Kelly and Trey Songz. Cortez shares the lilting ballad “For Me” with Kierra Sheard and shows off his quartet growl with the Williams Singers on “He Brought Me.” The legendary John P. Kee, stops in on the current Top 10 smash, “One More Time.”

In spite of the awe-inspiring duets, the set is equally impressive for Cortez’ nuanced solo performances.  He brings a little Isley Brothers vibe to the R&B-styled groove “Living For You” and demonstrates sophistication and class on the tune, “It Was Love.” It’s just Cortez and a cheerleading organist on the riveting  “Hymn Medley” that shows him riffing like a Pentecostal storefront preacher. On the up-tempo “Come Bless The Lord” and  “Mighty God” Cortez proves that he can even lead praise and worship tunes. The iTunes deluxe edition of the CD features a digital booklet and two additional songs, “All That I Need” and “The Blood.”

The 26-year old rising star has been singing all of his life and began his career singing with his family, The Cortez Singers, and recording with his musical godfather, John P. Kee.  “Zacardi is the best singer in America today,” says Blacksmoke Media CEO, Kerry Douglas. “I’ve been grooming him like I groomed James Fortune and Earnest Pugh. Zacardi is my next superstar and I have no doubt that he will be one of the biggest artists the gospel world has ever seen.” For more information, please visit www.mrkerrydouglas.com or www.zacardicortez.com.