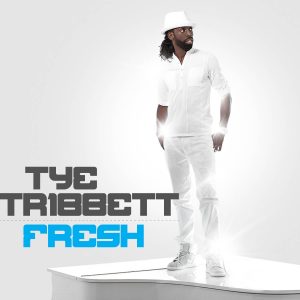 Featuring the new single of the same name, Fresh helps the listener delve deep into their life and realize that God’s grace, redemption and restoration are available to everyone.

Tye wrote or co-wrote each song on the new album which features a plethora of powerful songs including the first single, “Fresh,” “Your Blood” which features Gospel favorite Isaac Caree and “Champion” which features Grammy Award winner Israel Houghton (full track listing below).

Change is not an event, it’s a process.  And for Tye Tribbett — husband, father of two, Gospel singer, songwriter, producer, preacher and business man – the pruning process of change and deliverance took root after an intense wilderness period.   Touching many with his musical ministry, Tye’s fourth album release Fresh, positions him to step forth boldly with a new message of grace after weathering the storm of change in his personal life and ministry.  “Fresh means restored, new creature and it’s my announcement that nothing is the same,” Tye declares, “my thinking, my business, my patterns, everything is new.”  Nothing more exemplifies this change then Tye’s new musical life as a solo performer, having disbanded Greater Anointing (G.A.), the choir he conceptualized and led since 1996.  “My life has been a life of transition, for the gospels sake, not the gossip sake.  And this process also consisted of transition with Greater Anointing.  There is a season for everything and no matter how great a season is, the next one is always coming.  There was nothing wrong with G.A., it was just time for another season,” proclaims Tye.

No longer with G.A. standing behind him, Fresh is a collection of 16 new musical testimonies, that exemplify a new sound and a new musical direction, but is consistent in displaying Tye’s reverence, praise and worship to God. For more information on Tye Tribbett log onto www.tyetribbett.com.