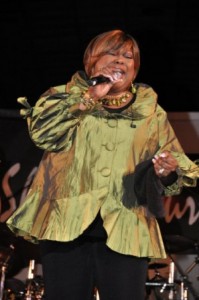 On September 25th, gospel music lovers of Dayton, OH poured into the Hara Arena at least 2 hours before the Sound of Praise Gospel Explosion began.   This was exciting to see, as Shirley Murdock prepared for her performance with background singers and musicians. Murdock smiled from ear to ear during the sound check because this event was like a family reunion for her. Prior to the event, Murdock told the Dayton Daily News how excited she was to share the stage with Tonya Baker and Marvin Sapp.

“I’ve known Tonya since she was a teenager, and I’m so happy for Marvin and always honored to be in his presence. So the concert will be like a family reunion.”-Murdock said.

The Explosion began at 7pm and Shirley entered the stage, following Tonya Baker’s anointed performance. Murdock’s set included songs from her upcoming project Live: The Journey.  She opened up with the vibrant song “He is God” followed by “Upward Way”, where she reminded the crowd that this is their season and also encouraged them as she sang the hit radio single “Dream”.

The crowd stood to their feet and jubilantly joined in with Shirley throughout her performance. As she exited the stage, the crowd applauded her and she quickly took time to chat with Marvin Sapp before his performance.

The evening continued as Murdock was greeted by a mass of fans requesting autographs, photos and CDs.  As always, Shirley honored their requests.

The Sound of Praise Gospel Explosion was an awesome prelude to the release of Shirley’s new project Live: The Journey on October 18th!

Shirley Murdock Live: The Journey CD and Music DVD will be released on Tyscot Music & Entertainment on October 18, 2011.