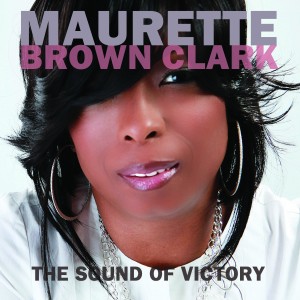 Maurette Brown Clark, often called “The Princess of Praise & Worship” makes an historic splash on the Billboard charts with her latest album, The Sound of Victory, garnering the highest album debut in her storied career thus far.  Debuting at #7 on Billboard’s Gospel Chart, and rising to #6 in its second week, the two-time Stellar Award-winning gospel star released her fourth solo album November 8, 2011 on Atlanta International Records/Malaco Music Group.  Recording The Sound of Victory live before an enthralled audience in Norfolk, VA, the twelve tracks pack a powerful punch with Brown Clark’s signature lyrical gifts that have made her one of gospel’s most beloved artists.

Encompassing the best of Brown Clark’s artistic and performance talents, the longtime Baltimore resident delivers an uplifting praise-filled album that envelops fans with a mix of buoyant melodies, reflective lyrics on faith, hope, strength and more.  Featuring the hit first single “I Hear The Sound (Of Victory),” Brown Clark also gives fans some timeless favorites on The Sound of Victory with special performances of her hits “Breaking of Day” and “Even in the Rain,” as well as dynamic songs such as “Don’t Be Discouraged (God Will See You Through),” “Awesome God,” among other soul-stirring, standout tracks.

A native of Long Island, NY, Brown Clark began singing at a very young age with her family group, The Brown Singers, and she counts legendary artists including Pastor Donnie McClurkin, CeCe Winans and her mentor, Richard Smallwood as major influences.  After graduating from college, she released her first solo album, How I Feel, in 1998 and earned a Stellar Award for Best New Artist in 2000.  She went on to release two more acclaimed CDs, By His Grace in 2002 and The Dream in 2007.  She continues to be an influence for multiple generations and expand the boundaries in gospel, bringing the gospel and joy of God’s gifts, love and guidance to reach others struggling through life challenges.

With an impressive 20 years in gospel music, Brown Clark has amassed hits including “Breaking Of Day,” “Just Wanna Praise You,” “Even In The Rain,” “One God” and “It Ain’t Over (Until God Says It’s Over)” and “Calvary” and “Angels” with Richard Smallwood and Vision.  Recently appearing on TBN and Bobby Jones Gospel, Brown Clark continues to tour regularly, in-demand to share her musical ministry and is currently nominated in the category of Best Female Gospel Artist of 2011 for the First Annual Digital Gospel Music Awards.