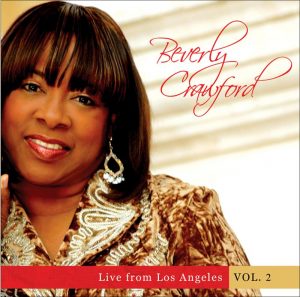 (Los Angeles, CA) Grammy & Stellar Award winner Beverly Crawford is gearing up for the release of her highly anticipated new CD, Live from Los Angeles – Vol. 2, on September 14th.  Featuring the hot new single “It’s About Time For A Miracle!”, Live from Los Angeles – Vol. 2 is the follow-up to Beverly’s #1 chart-topper “He’s Done Enough”, which dominated the Billboard Charts for over 70+ weeks & garnered 7 Stellar Award nods including Album of the Year, Artist of the Year, Female Vocalist of the Year, etc.

Universally regarded as one of the top vocalists in the world with a legion of ardent fans including Natalie Cole, President Obama, Patti LaBelle, Fantasia, etc, Live from Los Angeles – Vol. 2 features Beverly in her element – churching like a crazy woman!

“The incomparable Beverly Crawford is one of the truly great voices of our time!”
Ebony Magazine

“Beverly Crawford is my girl!  Without a doubt, one of the baddest vocalists in the world!”
Natalie Cole