“Blessed & Cursed” the Movie Moves from Shelves to Showtime 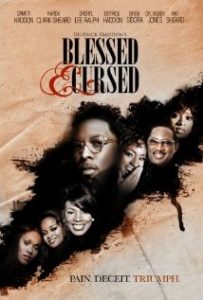 As the first feature project from Tyscot Music & Entertainment’s newest division, Tyscot Films, Blessed & Cursed was originally released as a straight-to-DVD title.  Despite not having a major theatrical release, the film has continued to gain grassroots appeal across the country.

Showtime subscribers can now watch Blessed & Cursed on many of its multiplex channels as well The Movie Channel, which is owned by the network:

Please check your local listings for the exact air times in your area.  For more information on future airings, please visit www.sho.com .

“Blessed & Cursed” depicts the biblical struggle of Saul and David with a modern day twist.  Haddon plays, Dwight Hawkins, an aspiring and gifted gospel singer who suddenly goes from humble novice to overnight sensation when he is hired as the Minister of Music at one of the Detroit’s most popular churches.  What starts out as a dream come true soon becomes a nightmare as Dwight’s ambitions are thwarted by an unlikely source.

The “Blessed & Curse” DVD and original motion picture soundtrack are both available at Walmart and www.walmart.com