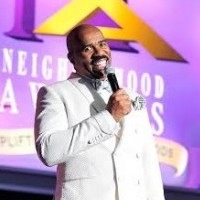 Tickets have been selling fast for this annual destination event experience, which kicks off Thursday, August 6th with the Stand Up Comedy Jam hosted by Nephew Tommy, with those two shows already sold-out.  The nominations have continued pouring in nationwide for the Ford Neighborhood Awards show categories on www.NeighborhoodAwards.com, with submissions open in one award category per day until Wednesday May 27th.  This year’s awards finalists will be unveiled by the Steve Harvey Morning Show in one category each day when the voting period opens online, which runs Monday, June 1st for voting on the Best High School Coach category, until Tuesday, June 16th for voting on the Best Community Leader.

Say Co-creators Steve Harvey and Rushion McDonald, “This year is another don’t-miss summer celebration takeover in Atlanta! We are bringing you some returning favorites, great performances and inspiring entertainment. Keep sending in your nominations and don’t forget to vote for your neighborhood favorites to see who takes home the awards this year!”

With over 15 signature events and activities during the weekend, the annual Ford Neighborhood Awards show hosted by Steve Harvey is always filled with unforgettable poignant moments, comedy and surprises, with Kenny “Babyface” Edmonds’ performance to open this year’s show.  Other featured events include the three-day State Farm Neighborhood Awards Expo, the State Farm Freedom Friday Party hosted by Ne-Yo with performances by Erykah Badu and Jodeci, Family Feud Live presented by Ford, the Ford VIP After Party hosted by Doug E. Fresh with performances from him and Salt-N-Pepa, the McDonald’s Inspiration Celebration Gospel Tour with Yolanda Adams, and the grand prize singing competitions with the Sing Your Way to the State Farm Freedom Friday Party finale hosted by Sheryl Underwood and the Neighborhood Awards Church Choir Competition presented by AARP.