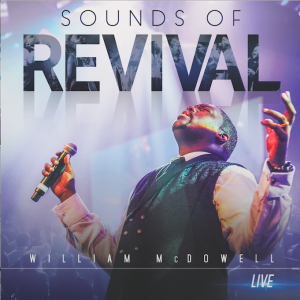 Passionate about offering a genuine worship experience to the masses, recording artist and songwriter William McDowell takes his music ministry to new heights with the release of his fourth album, SOUNDS OF REVIVAL.
SOUNDS OF REVIVAL is set to be released via Delivery Room Music / Entertainment One Music on January 22, 2016 and was recorded live last June at Bethany Church in Baton Rouge, LA.
Indicative of the title, SOUNDS OF REVIVAL, is a complete body of work that builds and encourages spiritual revitalization. The album is a musical call to recovery and renewal in our churches and in our personal lives.
“SOUNDS OF REVIVAL is meant to be a catalyst to stir the desire of revival in the hearts of God’s people,” says McDowell. “We know that the earth is in desperate need of revival and I pray that this experience awakens something in our hearts!”
The album, from beginning to end, initiates an atmosphere of worship and the ingenuity in the songwriting is evident while the musical compositions are strong on every song. Whether for corporate worship settings or personal worship moments, songs such as “Reveal,” “We Just Want You,” “Don’t Mind Waiting,” and“Jesus Is Here” sets the atmosphere.
The lead single “Send The Rain,” currently in the Top 10, continues to grow at gospel radio and is a deeply felt song that embodies the overall theme of SOUNDS OF REVIVAL.  An anthem much like McDowell’s previous hits, “Send the Rain,” is an expression of worship that is both pure and profound.
William McDowell is a true innovator in modern worship music. His latest release, Withholding Nothing, received a GRAMMY Award nomination and Dove Award nomination, and was named Praise & Worship CD of the Year at the 30th Annual Stellar Awards. With a steady touring schedule in the U.S. and internationally, McDowell has contributed to the sound of contemporary praise and worship in churches across the globe, while maintaining a level of musicianship that is unparalleled. He generously and consistently sings for One, and as listeners, we are given the privilege to join him.