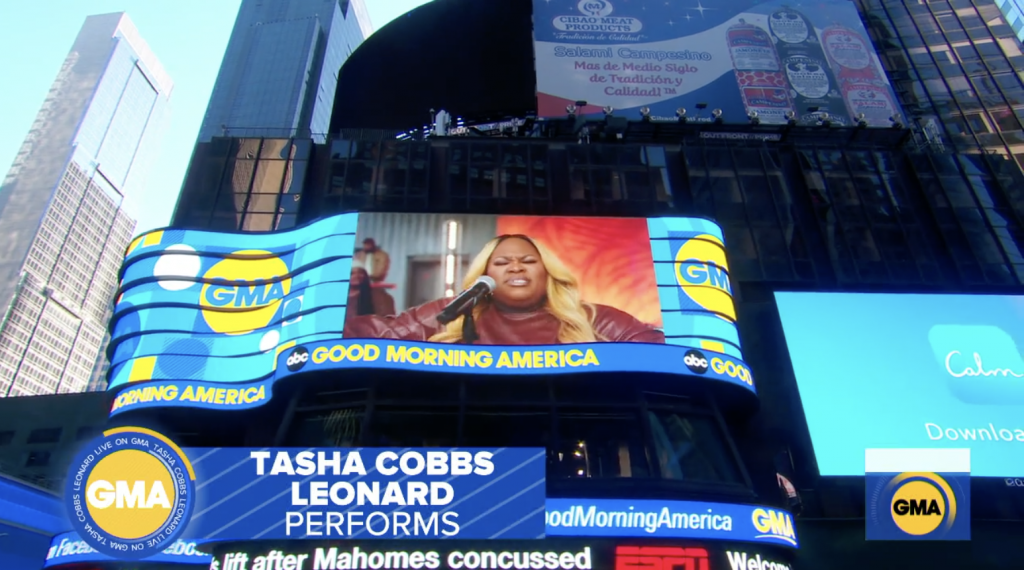 GRAMMY®-winning singer/songwriter Tasha Cobbs Leonard returned to ABC’s Good Morning America for an interview and performance of her current single, “In Spite of Me,” This was Tasha’s first appearance on the popular morning show since 2018, when she performed her #1 single, “I’m Getting Ready.”

“In Spite of Me,” one of the fastest-rising singles of Tasha’s career, is already a Top 20 radio hit and continues to climb the BDS Gospel Radio chart. A special studio version of the song features pop icon Ciara and appears on her current chart-topping album, Royalty: Live at The Ryman, released in September 2020.
“Because of how God gave us these songs, certain concepts are woven throughout the whole project. Each Friday for the rest of this month, I’ll be re-releasing my album in sections, to bring attention to these themes and to give fans a different way to engage with this music in their daily lives,” says Tasha Cobbs Leonard.
The first playlist, titled Faith + Hope, is available now on streaming platforms.
In 2020, Tasha Cobbs Leonard earned two additional RIAA® certifications—one Platinum certification for her hit single “Break Every Chain,” and a Gold certification (her third) for the #1 radio single “You Know My Name.” She was also awarded highest honors as Gospel Artist of the Year at the 51st Annual GMA Dove Awards and Artist of the Year at the 35th Annual Stellar Awards before being named Billboard’s Female Gospel Artist of the Year and Top Gospel Artist of the Decade.