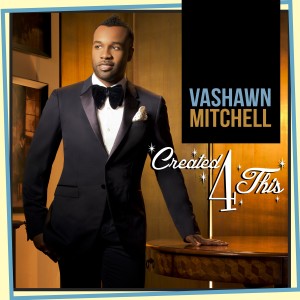 Six-time Stellar Award winner and GRAMMY®  nominated recording artist VaShawn Mitchell will release his new project, Created 4 This, August 28, 2012. The new album was recorded live in his hometown of Harvey, IL.  Created 4 This will also be released as a Deluxe Edition CD +DVD, which features 13 songs, three live performance videos, and exclusive behind-the-scene footage.  Sold exclusively at Wal-Mart, fans can also purchase the Limited Deluxe Edition which contains the CD + DVD plus a T-shirt.  Additionally, fans can pre-order the new album at iTunes beginning August 7th.

The first single, “Turning Around For Me” enters at #13 on Billboard’s Top Christian/Gospel Digital Songs chart. At Wal-Mart, the exclusive single contains a unique QR Code.  By scanning the code using an Android or IPhone compatible device, fans are granted access to exclusive video streams and more.

Mitchell had multiple appearances at the ESSENCE Music Festival in New Orleans, LA (July 5-8, 2012). He performed his signature hit single, “Nobody Greater,” with Fantasia at the Mercedes-Benz Superdome’s Main Stage on the festival’s closing night. Earlier that day, he performed at the ESSENCE Empowerment Experience’s All Star-Gospel Tribute.  In addition, he performed two sets at the Wal-Mart Live! Pavilion and, he performed at the International Black Broadcasters Association Luncheon at the Roosevelt Hotel.  On Sunday, he hosted the “African Pride’s My Pride, My Way” event.

ROOT magazine features Mitchell on the cover of the current issue.  The magazine, which includes the cover story, “The Evolution of VaShawn Mitchell,” was distributed at the Gospel Music Workshop of America’s national convention in Nashville. Mitchell is also scheduled to appear on WBLS-FM’s Central Park Summer Stage concert event on August 5 in New York City.  Mitchell will also co-host Verizon’s How Sweet The Sound event in Detroit (September 15) and Los Angeles (September 21).

The acclaimed songwriter is best known for his mega hit song “Nobody Greater” from the Triumphant album. In 2011, Mitchell received 11 Stellar Award nominations, the most nominations received by an artist that year.  Billboard magazine declared “Nobody Greater” the #1 Most Played Gospel Song of 2011. Mitchell was named Billboard’s #1 Gospel Radio Artist of 2011 and Triumphant was among the Top 5 Gospel Albums of 2011.   The single held the #1 position for nine consecutive weeks on Billboard’s Hot Gospel Songs chart and crossed-over to the Urban Contemporary Adult charts.  Mitchell also received two GRAMMY® and two GMA Dove Award nominations for both the album and single.