In a special appearance on WGN Morning News, Founder and Chairman of the National Museum of Gospel Music, and Founder of the Stellar Awards, Don Jackson presented Mitchell with a Gold plaque commemorating 500,000 plus streams and sales of his timeless hit song “Nobody Greater.” Presented on behalf of the museum, and the Chicago gospel music community, Mitchell celebrated the milestone with a rousing performance of the hit song. Watch the presentation and performance here. 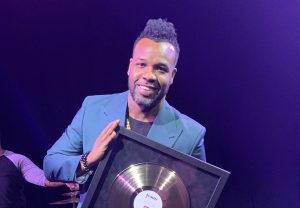 “Nobody Greater,” widely considered Mitchell’s breakthrough song, was released initially on his EMI Gospel debut album TRIUMPHANT. “Nobody Greater,” went on to top the Gospel radio charts for several consecutive weeks and was recently listed on Billboard’s Top 10 Decade-end Hot Gospel Songs chart. VaShawn has since released several chart-topping songs, including “Joy,” “Turning Around 4 Me,” and his current radio single “God Can Do Anything.”

Mitchell is a Grammy-nominated, and multiple Stellar and Dove Award winner, whose storied career has spanned 20 years. “It’s an honor to see how ‘Nobody Greater’ has transcended from the recording to be such a blessing to the body at large,” said Mitchell. “I am honored and humbled about the success of ‘Nobody Greater,’ also that people have become closer to God through this song.”