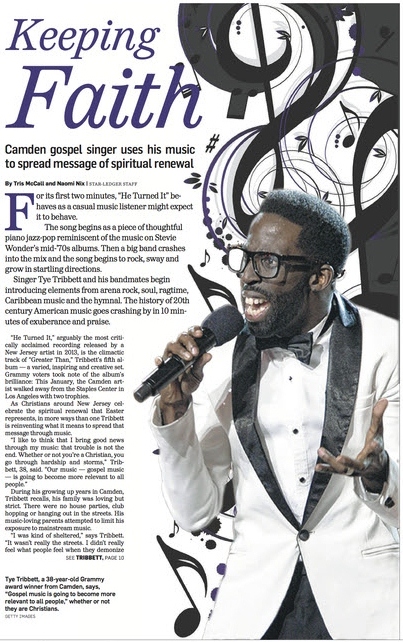 The cover issue touches on several topics including, Tribbett’s recording career, being a family man, his marriage, spiritual life, growing up in Camden, New Jersey, his most recent life change and Easter.

The tell-all in-depth cover story comes as the latest of headline-grabbing news forTribbett who is currently featured in a six – page spread in Sister 2 Sister Magazine’sApril 2014 issue in addition to high profile television performances and appearances this month on UNCF’s ‘An Evening of Stars’, Celebration of Gospel, 106 & Park and Lift Every Voice – all shown on BET Networks.

Lauded by music critics across the country, GREATER THAN received stellar reviews from two of the nation’s top newspapers. The New York Times declared that,”Tribbett is an exceptional gospel artist” (http://nyti.ms/19g8I0W). The Los Angeles Times awarded the CD three out of four stars, stating, “Combined with Tribbett’s breathless, exclamatory singing, this frenzied variety demonstrates the breadth of his devotion” (http://lat.ms/16g9tIN).

Tribbett continues to promote his project across the country and is prepping for his music mentorship program in Columbia, SC on May 15th -17th.