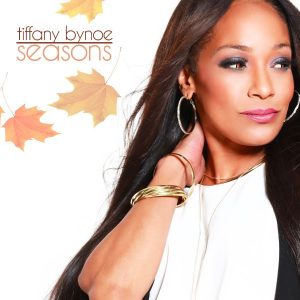 SRT Entertainment recording artist, Tiffany Bynoe, breaks Billboard Top 30 Gospel Chart with her latest single, “Seasons.”  Co-written by Tiffany and Kyle Bynoe, the song was co-produced by Jules Bartholomew and Kyle Bynoe, who has scored a Grammy win and multiple Dove and Stellar Award nominations throughout his career.

The song has climbed the charts steadily since its release just a few weeks ago and has elicited a strong response from critics and fans alike due to its strong message and world-class production.

“We all go through seasons in life,” says Tiffany. “I hope this song will bring hope and encouragement to people regardless of the season they are in.”

The success of the song, which is currently available on iTunes and all digital outlets, is also a major achievement for SRT Entertainment, which has two songs currently on the Billboard Top 30 – “Seasons” and “King Oh King” by Maurette Brown Clark, which sits at No. 12.

“I’ve been fortunate in my career to have had success garnering multiple Billboard and Mediabase No. 1 songs and numerous Top 30 songs for various labels, but charting two singles concurrently on my very own label serves as a significant milestone,” states D.A. Johnson, President of SRT Entertainment.

“Seasons” is a precursor to Tiffany’s forthcoming full-length album, Bibles & Crates, which is expected to release mid-2016, with a tour soon to follow.

While readying the new project, Tiffany continues to work on behalf of her foundation, Gabby’s Heart, which brings awareness and raises funds to support research for pediatric cardio health. Tiffany founded the organization to honor her daughter, Gabby, who, though healthy today, was born with dextracardia, a severe heart defect.

“If you saw her today, you’d never know there was ever a problem,” says Tiffany. “It just goes to show how God truly walks you through different seasons of your life. Even when things don’t make any sense at all, He stays with you through the winter, into spring with new mercies everyday. He is the redeemer of time.”

About Tiffany Bynoe
Tiffany Bynoe is a chart-topping recording artist whose resume is as diverse as her audience. Committed to rising above genre she has enjoyed significant success in both the Gospel and main-stream music industries. At the age of sixteen, she was a three-time winner at the Apollo theater and had signed a record deal with Pendulum Records, with whom she released a single that soared to the No. 1 spot on Billboard. Today, following a hiatus from the industry, she is readying her latest studio project, Bibles & Crates.

In addition to music, Tiffany is the founder of a non-profit organization called Gabby’s heart, in honor of her own daughter, who was born with a potentially fatal heart condition. For more news, music and touring information, visit www.tiffanybynoe.com.