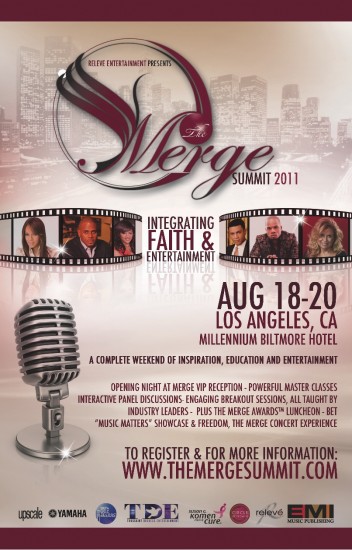 THE MERGE SUMMIT 2011 will host its third annual conference with an all-star line-up of some of the top names in the entertainment industry on August 18-20, 2011 at the Millennium Biltmore Hotel, 506 South Grand Avenue, Los Angeles, CA. The event, presented in association with partners EMI Music Publishing, Susan G. Komen for the Cure, and UPSCALE magazine, integrates faith and entertainment, and provides a platform for men and women of faith to interface with, learn from and partner with leading executives and talent in the entertainment industry, from New York to Hollywood.

The multifaceted program, one of the largest entertainment industry events for people of faith, is a complete weekend of inspiration, education and entertainment. Nearly 100 of the industry’s top entertainers and executives will lead more than 20 interactive panel discussions, workshops and Master Class sessions, covering the spectrum of music, television, film, radio, creative development, branding, management and new media.  Throughout the event, actors, directors, producers, writers, and executives will network with attendees, share their insights and give feedback, as well as provide inspiration for their individual journeys.

In addition to EMI Music Publishing and UPSCALE magazine, THE MERGE SUMMIT is presented with the support of BET Music Matters, Yamaha Commercial Audio, Bronner Brothers, and Precious Times magazine.

Opening Night at THE MERGE SUMMIT, a VIP Reception

The Worship Experience at THE MERGE, with

The Wellness Lounge (by appointment only)

Available for VIP Package attendees. Offers private, complimentary retreat sessions that introduce ancient therapies and innovative treatments such as acupuncture, reflexology, massage therapy, ear candling, and antioxidant screening. All are presented in a warm and relaxing environment and performed by licensed therapists.

MASTER CLASS:  Produced by Faith: Enjoy Real Success without Losing Your True Self Sharing his own journey, including his most recent successes with The Karate Kid and Jumping the Broom, DeVon Franklin will discuss how being bold about his Christian faith, while being driven and ambitious has helped him to excel in a high-profile, competitive industry.  His story will embolden you to use the power of your faith as your greatest professional advantage, and to use the compass of God’s Word to guide you to your true passion and purpose in life.

Inspired by Michael’s romantic comedy Brown Sugar, this is a conversation about how he went from homeless to Hollywood, and how faith played a role in his success. Few know the story behind how Michael went from reading a book on screenwriting one weekend, to selling his first script to a major studio—without representation—for $250,000.

The Image of Success:

A session in marketing and promoting your gift, your product and your brand, with insights and advice from some of the industry’s best.

A Master Class in Artistry and Inspiration

Cece Winans has a music ministry known the world around.  Alone, and as apart of the legendary brother and sister duo, Bebe & Cece Winans, she has garnered multiple GRAMMY®, Stellar, and Dove awards, and sold millions of records. But if you ask her what she is most proud of, the answer will be far removed from her endless list of accolades, best-selling albums and widespread recognition.

In this special Master Class session, Cece will share her heart, her journey, and the knowledge that has helped her nurture her gift, balance faith and fame, and achieve her greatest triumphs:  a close relationship with God, an amazing marriage, two wonderful children, and the opportunity to live out her purpose—nurturing and empowering youth and young adults .

This session, presented by EMI Music Publishing, explores the diverse ways songwriters and music creators can generate revenue with their creativity and build a viable music career across diverse platforms.

The Business of Reality TV

Learn from some of TV’s most successful network executives and show producers about the process of developing an original reality series. In this interactive, Q&A driven session, attendees will gain insights into what networks look for, the current pitch climate, and typical parameters of a first-time development deal.

A panel of Hollywood decision-makers, agents and attorneys will provide behind-the-scenes realities of the film business.

This session will offer attendees insights, perspectives, advice and strategies for succeeding in today’s ever changing music business, from the individuals who are actively navigating and succeeding in the industry.

The right representation is key to your success in Hollywood.  Managers and agents are always looking for talent, but how do you capture their attention and build your team?  Learn what agents and managers are looking for and what you should look for in developing your dream team.

The Worship Experience at THE MERGE

The Wellness Lounge (by appointment only)

Available for VIP Package attendees. Offers private, complimentary retreat sessions that introduce ancient therapies and innovative treatments such as acupuncture, reflexology, massage therapy and antioxidant screening. All are presented in a warm and relaxing environment and performed by licensed therapists.

Entertainment industry veteran Debra Langford returns to THE MERGE SUMMIT and her message will empower us to take charge of our destinies in this business and command our place in the industry as professionals. Take charge and maximize every opportunity using the wisdom you will gain from this incredible woman.

Have you ever wanted the chance to ask questions, make connections and get insights from some of the most successful executives in our industry?  THE MERGE SUMMIT is excited to offer you both opportunity and access to top executives at our Executive Speed Connecting & Mentoring event.

In this special session, limited to 100 registrants, attendees will have the opportunity to meet with five executives for five minutes. Attendees will have the chance to ask questions and get the all important feedback on:  transferring of skills, 30-second elevator pitch, style (including appearance tips for interviews), resume review and general insights into the entertainment/media world.

THE MERGE Leadership Forum brings together and engages leaders from the entertainment industry, corporate America, and prominent ministries for a dialogue on bridging the gap.  The goal is to foster collaboration and identify opportunities for mutually beneficial partnerships.

Come and meet some of film and television’s top directors, and hear about their personal and professional insights to achieving success in the directing game.  Topics will include the dynamics behind breaking into the Hollywood studio system, the changing production model of film and television, the concept of shadowing, as well as advice on how to create personal and professional relationships needed to become a top working director.

Dealmaking: The Business of Creativity

This panel of experienced attorneys and dealmakers will share with you the art and reality of deal making, including ensuring you have proper legal protection and how to shape projects that are financially viable and appealing to partners and investors.  They will also share other essentials for creating successful deals, including the importance of relationships and relationship building.

Anatomy of a Great Artist, presented by BET Music Matters
For 30 years BET has been the place to find some of the most profound musical artists of our time, and the Music Matters initiative, which highlights some of the best up and coming talent from all types of music, continues this tradition.

In “Anatomy of a Great Artist,” Kelly Griffin of the “Music Matters” campaign, and special guest panelists, will share their insights and strategies for growing as an artist, developing your personal “voice” and preparing your music and brand to succeed on the next level.

These leading actors are all unique in their own way. Yet, whether their forte is theater, television, or film, they have all made sacrifices, faced and overcome challenges, experienced breakthroughs and reaped rewards as they built their acting careers. Discover the common threads that connect actors, and gain valuable insight from these artists, who will share the unvarnished truth behind their success.  The panelists will also share insights, tips and strategies that every actor needs to know to develop and sustain their careers.

With Harry Lennix (Stomp the Yard, The Matrix, The Five Heartbeats), Lamman Rucker (Meet the Browns, Why Did I Get Married?), and more to be announced

As Managing Partner and Head of Music at Creative Artist Agency, Rob Light leads a department that represents many of the world’s most popular and talented musical artists and comedians, including Janet Jackson, Robin Thicke, Stevie Wonder, Corinne Bailey Rae, Christina Aguilera, John Legend, Tom Hanks, Justin Timberlake and Fantasia, to name a few.  In this special MASTER CLASS, he will share secrets and techniques that he’s seen and used to help develop amazing careers, including his own.

Ever wonder what it takes to become an Executive Producer and Showrunner of a hit television show? Join some of television’s most successful creators/showrunners/executive producers for a conversation about running a hit television series and their journeys to the top of the game.  These top executive producers will also give crucial advice for writers trying to break into and navigating the Hollywood system.

Producer’s Workshop
Producing a great feature film is never easy.  In this session, panelists, with over 30 films and $2 billion dollars in box office receipts among them, will share their insights about the role of a successful film producer, from developing compelling material,  to finding financing, to building strong collaborative teams, and ultimately, taking the project from script to screen.

Success at Radio
The radio panel will address issues such as how to draw and sustain listeners, how to break artists through such diverse radio formats, how to get your records on the air and keep them in rotation.  Get the inside track and insights from the players and decision makers in Internet, terrestrial, and satellite radio.

Get The Picture! (Television 101/Current Programming)

Whether you aspire to be a creative executive or a television writer, this is the panel for you. Learn from some of television’s top executives what networks and studios look for when developing television series from script to screen.  Attendees will also gain invaluable insight into the pitching and development process, as well as the day-to-day management of current television series, including the staffing of writers and directors.

While traditional theologies maintain that artists should reserve their gifts for the church, many Christian artists are eager to spread their wings and soar within the mainstream arts and entertainment industries—praying and believing that one day, they’ll become a star. But what does true “Stardom” really mean?

Led by actress Edwina Findley, this inspirational and informative panel offers a behind the scenes look at both the trials and triumphs often experienced by prominent Christians in the entertainment industry, and empowers emerging stars to not only survive, but shine within this challenging arena.

*Panel sessions and times are subject to change