The Showers Releases New Video and Uplifts During Eventful Weekend 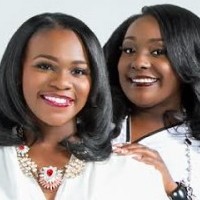 Friday, January 16th, many established gospel artists and tastemakers merged in Atlanta, GA during the BMI Trailblazer Weekend. The city was overflowing with major events and turnouts but there was one group, the new amazing gospel family, The Showers, that was moving silently throughout the city, effectively making major noise and all while praising the Lord at the same time.

First the group stopped by 102.5 Praise FM to meet with media strategist veteran, Coriya Burns-Falker, program director Derek Harper, the radio personalities, beautiful Darlene McCoy, spiritual comedienne Veda Howard and Brother Myron G who gave them a tour of the station. It was a great meeting of the Holy Spirit and everybody felt “Better” after that inspiring life event.

Friday night they family hosted an intimate listening party in Buckhead at Social Haven. The party was organized by Marvin Powers of A&P Records, Mel Breeden (Radar Online) and gospel dynamo Canton Jones. Deon Kipping was there all night, along with Lowell Pye, Rick Joyner, Coriya Burns-Falker of Radio-One, Joi Pearson of Rolling Out and lots of other ATL friends and family with food catered by Gladys Knight “Chicken & Waffles” Soul Food restaurant.

On Saturday, all day, the group did a highly styled photo shoot with celebrity stylist Kash Howard, hairstylist Quitta Tiller and makeup extraordinaire Christian Balenciaga with the optical talents of the aforementioned Joi Pearson who is well known for her photo journalism as well as her celebrity clientele for photography.

And then on Sunday, the group’s booking agent/marketing consultant, Dr. Trina Pullum brought the group to her spiritual father, Bishop Paul Morton’s ATL Westside church, Changing A Generation Full Gospel Baptist where the family brought the house to their feet with their hit song “Better”. Better is more than a song, it’s a movement, a spirit, a new and improved way of life and living. The song moved Bishop Morton the same way it did Pastor Donnie McClurkin, Kelly Price and Tamela Mann almost a year ago. The song still has wings and if that wasn’t enough, Canton Jones is currently in production, preparing a hot new remix of the song with a video to follow when the CD drops this year in April. Talk about Better! Praise about Better! Be Better! Feel Better! Do Better!