Home / Artists / The Japan Mass Choir Reaches #3 On Billboard with “Powerful: Living In His Body As One”

The Japan Mass Choir Reaches #3 On Billboard with “Powerful: Living In His Body As One” 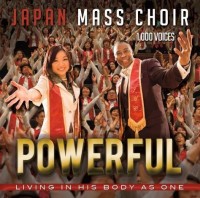 The Japan Mass Choir’s CD entitled “Powerful” (Living In His Body As One) on Lifeline Records / SRT Entertainment, reached and spent 3 weeks at #3 on Billboard’s Top Gospel Albums Chart.  According to Billboard, it was the greatest gainer on the Gospel chart!  It remains in the Top 10 at #7.

The Japan Mass Choir’s visit to America has been a tremendous success! They signed a distribution deal with D.A. Johnson, President of SRT Entertainment and the “Powerful” CD is now Live on iTunes!

Witness the 1,000 voice, Japan Mass Choir, the world’s largest community choir’s debut video, “Powerful – Living In His Body As One”  now on YouTube.

“SRT Entertainment is honored to be the home for the Japan Mass Choir throughout the world. We truly believe that this project “Powerful – Living In His Body As One” is a rare opportunity to present Gospel music in a unique way, showing its diversity and influence around the globe. Its rise into the Top 3 of the Billboard Top Albums chart is a testament that the American Gospel / Christian music purchaser has overwhelmingly embraced the ministry of the Japan Mass Choir and the message in the music covers any cultural divide.” Said D.A. Johnson.

JMC kicked off their U.S. Southern Tour in Kings Mountain, NC, which is Jett Edwards, TJMC producer’s hometown. Edwards received the “Key To City” by Mayor Rick Murphrey, followed by many performances throughout the state.

The producer, Jett Edwards and co-producer Jenna are making history, as this is the first time in the history of Japan or Asia, that a record and producing team has manage to produce a thousand-voice choir record release and U.S. Tour.

Edwards, CEO, a Tokyo based producer and Gospel Artist has worked with the Five Blind Boys of Mississippi & Alabama, Janet Jackson, George Benson, among others.  Edwards has partnered with Japanese Gospel entrepreneur Jenna, who runs the largest Gospel music school franchise in Japan with approximately 2000 members nationwide.

“I started my Gospel Music journey here in Japan using music to encourage people who were impacted by the 2011 Tsunami,” says Edwards, “and through our charity Believers Today, we would visit the devastated areas like Tohoku Ishinomaki and encourage them with songs.”

Powerful explains the message taken from 1Corinthians 1:12 and the rich cutting edge sound of the music. Feel like you need a little Power in your life, here’s where you get it. The CD is available through all the usual digital media outlets as well as the Believers Today and Japan Mass Choir websites.

"Powerful: Living In His Body As One" Billboard The Japan Mass Choir 2015-08-10
Mike Jones