Home / News / The African Pride Gospel Superfest To Air This Sunday, August 25, 2019 on TV One

The African Pride Gospel Superfest To Air This Sunday, August 25, 2019 on TV One 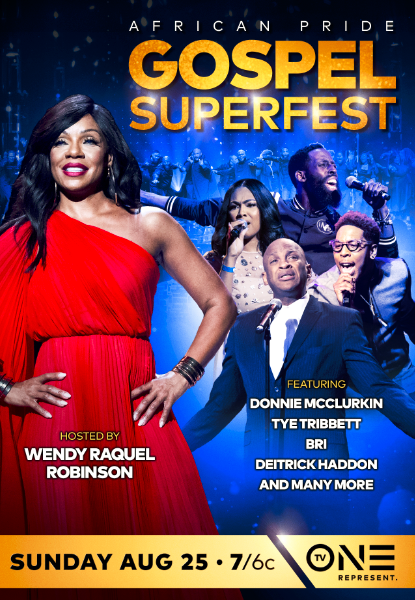 TV One will air THE AFRICAN PRIDE GOSPEL SUPERFEST on Sunday, August 25, 2019 at 7 p.m. ET/6C followed by an encore presentation at 8 p.m./7C. Held at the Schuster Performing Arts Center in Dayton, Ohio, the 19th annual celebration will bring together gospel recording artists and celebrities for one of America’s most anticipated television events in urban gospel.

Don’t miss a memorable evening of performances, uplifting entertainment, and a salute to gospel luminaries and their musical legacies.

THE AFRICAN PRIDE GOSPEL SUPERFEST is produced by Cartwright Entertainment Group with Bobby Cartwright Jr. and Renita A. Cartwright serving as Executive Producers.

For thirty years, African Pride has addressed the hair care needs of all hair types and textures whether natural or relaxed with brands like Black Castor Miracle, Moisture Miracle, Shea Miracle, Olive Miracle and Dream Kids. African Pride is committed to creating affordable, effective products made from quality ingredients and marketed with integrity and respect. For more information about African Pride’s full family of products, visit AfricanPrideHair.com. You can also join the African Pride conversation on Facebook (@MyAfricanPrideHair), YouTube (@AfricanPride), and on Instagram and Twitter (@MyAfricanPride). To start your own conversation about the brand, use its official hashtag #FeelingMyPride.