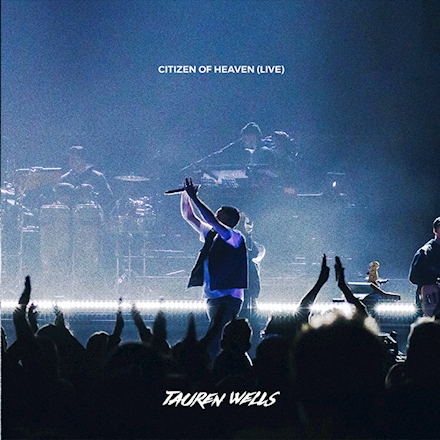 During a time when music lovers are longing for a live concert experience, GRAMMY® nominee Tauren Wells felt compelled to release Citizen of Heaven LIVE, which includes 15 audio tracks and 4 videos that were recorded during his album launch event in January 2020 at Lakewood Church in his hometown of Houston, TX. To pre-save the LIVE album and receive the award-winning, multi-week No. 1 single “Famous For (I Believe)” as well as the title track, watch the dynamic live performance video clip of “Citizen of Heaven,”

“My favorite thing about creating an album is anticipating what the live versions of the songs will become,” says Wells. “Having a song come alive for the first time in the writing room or the studio is a crazy feeling, but there is a different energy and excitement when the song comes alive in a room full of people! We captured all that fire on this new LIVE album, and it is a full-on heatwave! You’re about to dance, cry, laugh, and worship all at the same time so be prepared. The people in the car next to you are going to be really confused!!”

Tauren Wells is an eight-time GRAMMY®-nominated artist, six-time Dove award winner (including 2020 CCM Artist of the Year and Album of the Year), platinum-selling singer/songwriter, multi-instrumentalist, entrepreneur, as well as a public speaker. Accumulating 776 million total solo career global streams with over 1.95 billion audience impressions in the US, Tauren has established himself as one of the most talented and exciting young artists in the music industry today. Known for tracks like the Platinum-selling hit “Hills and Valleys,” the Gold-certified “Known,” as well as the multi-week No. 1 “Famous For (I Believe),” the five-time No. 1 hitmaker released his GRAMMY®-nominated second full-length studio album, Citizen of Heaven, in January 2020.