Tasha Cobbs Leonard and Ciara New Single “In Spite of Me” 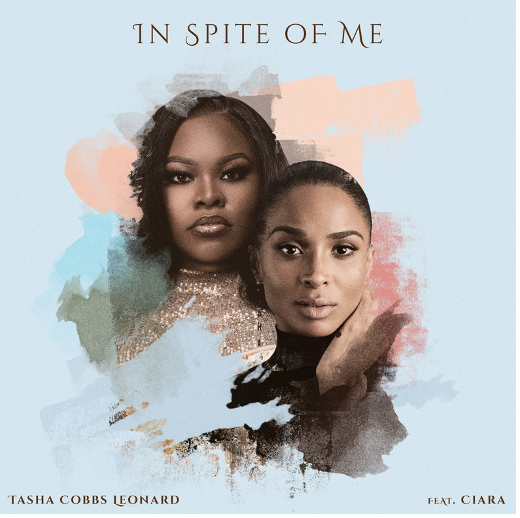 GRAMMY® winner Tasha Cobbs Leonard surprised fans today with the release of “In Spite of Me,” featuring platinum-selling superstar Ciara, available now across all digital outlets [https://tcleonard.lnk.to/Royalty!ciara]. The track comes just days after the powerhouse singer/songwriter scored a #1 debut on the Billboard Top Gospel Albums chart with her new album, Royalty: Live at The Ryman, released by Motown Gospel.
A reimagined studio version of the original, “In Spite of Me” featuring Ciara is a feel-good song set to lush backing vocals and punctuated by passionate leads. The song’s lyrics celebrate God’s perfect love for imperfect people: “Every scar, every flaw, You see it all, You see it all / You still love me, love me, in spite of me.”
“Tasha is one of the strongest voices in gospel music and we’ve always been huge fans of hers in our house,” shares Ciara. “In times like these, I am super thrilled to be part of a song filled with messages of hope and inspiration that can be shared with the world. With God’s love and grace, nothing in life is insurmountable. It’s truly a special moment.”
Tasha Cobbs Leonard is equally ecstatic about the collaboration.
“Ciara is an icon. A role model. A wife, mother, and a lover of God,” she shares. “Her musical versatility is undeniable and I am so glad she joined me on this song to tell people about the unconditional love of God.”
A vibrant lyric video for the new song is also available on Tasha Cobbs Leonard’s YouTube channel today: https://TCLeonard.lnk.to/InSpiteOfMe.
Royalty: Live at The Ryman is one of the most anticipated new albums in gospel music this year. Recorded before a closed house, “for an audience of One” at Nashville’s famed Ryman Auditorium, the project merges Tasha Cobbs Leonard’s country, bluegrass and gospel music roots to create an authentic musical experience.
About Ciara
Ciara is a Grammy Award winning singer/songwriter, producer, model and actress. Over her fifteen-year career, she has sold over 23 million records and 22 million singles worldwide, including chart-topping hits “Goodies,” “Ride,” “Oh,” “1, 2 Step,” “I Bet,” and “Level Up.”
She formally launched Beauty Marks Entertainment (BME) as a boundless platform for her music, media, film, fashion, philanthropy, technology, and entrepreneurial pursuits. The company’s business model was built on fully supporting the artist and the female-led enterprise places Ciara at the forefront of forward-thinking entertainers taking an entrepreneurial approach to their careers.
Ciara is a devoted wife and mother of three as well as a philanthropist who sits on the board of the Why Not You Foundation which she shares with her husband Russell Wilson. The foundation is a nonprofit dedicated to education, children’s health, fighting poverty and empowering today’s youth to lead with a why not you attitude.
About Tasha Cobbs Leonard
Tasha Cobbs Leonard is currently the highest-selling female artist in gospel music, with over 1 billion streams over the course of her career. In addition to multiple #1 albums and singles, she has earned an impressive list of accolades, including one GRAMMY® Award, 3 GRAMMY® nominations, one RIAA® Platinum-certified single (“Break Every Chain”), two Gold-certified singles, and one Gold-certified album. She has also earned the title of Top Gospel Artist at the Billboard Music Awards for the past two years and, in 2020, was named Artist of the Year at the 35th Annual Stellar Awards of Gospel Music.
About Motown Gospel
Motown Gospel is one of the most prominent gospel music companies in the world, boasting over two decades of chart-topping and award-winning artists, albums, and songs. A division of Capitol CMG/Universal Music Group, the world’s leading Christian music company and market leader in recorded music, distribution, and music publishing, Motown Gospel’s artist roster has included Tasha Cobbs Leonard, Smokie Norful, Tye Tribbett, Brian Courtney Wilson, Kierra Sheard, The Clark Sisters and more.