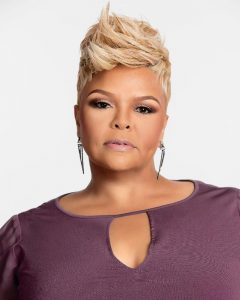 Tillymann Music Group Platinum-Selling Top Gospel Artist Tamela Mann received 2018 Billboard Music Award nominations for “Top Gospel Artist” and “Top Gospel Song” for “Change Me” from her 2017 Billboard Music Award-winning, No. 1-selling album, ONE WAY. In 2017, Tamela broke the record for the most No. 1’s in the history of Billboard’s Gospel Airplay chart when “Change Me” became her sixth leader, then sat atop the chart for 14 weeks.
“I’m honored to receive two Billboard Music Award nominations,” said Tamela. “Thank you Billboard, my team, the radio stations across the country that support my music, and fans. I’m forever grateful to you all and blessed to get to share music that lifts people up.”
Tamela’s latest single, “Through It All” featuring super producer Timbaland, is pushing Top 5 this week on the Billboard Gospel Airplay Chart. The track is nearing one million streams across all streaming platforms.  Watch the lyric video:
Tamela is gearing up for an action -packed 2018. She co-stars in the new original TV One holiday movie, MERRY WISH-MAS, with her husband, actor/comedian David Mann. The couple’s new memoir, Us Against the World: Our Secrets to Love, Marriage and Family (HarperCollins/W Publishing), is available this fall. In the book, David and Tamela share personal stories and childhood memories, the surprising details behind how they met, married and started a family, what catapulted their careers and the growing pains of building a family business with their adult children. The duo is also in the studio recording a new album of love songs and in production on a major market fall tour.
In addition to Tamela’s 2017 Billboard Music Award win and three career Billboard Music Award nominations, she has won a Grammy® Award, BET Award, two NAACP Image Awards, numerous Stellar Awards and Dove Awards, and received three Soul Train Award nominations. In March, Tamela was honored with the James Cleveland Lifetime Achievement Award at the 2018 Stellar Gospel Music Awards.
The Billboard Music Awards recognizes the hottest names in music today and will air live from the MGM Grand Garden Arena in Las Vegas, Sunday, May 20 on NBC at 8:00 p.m. ET/PT.