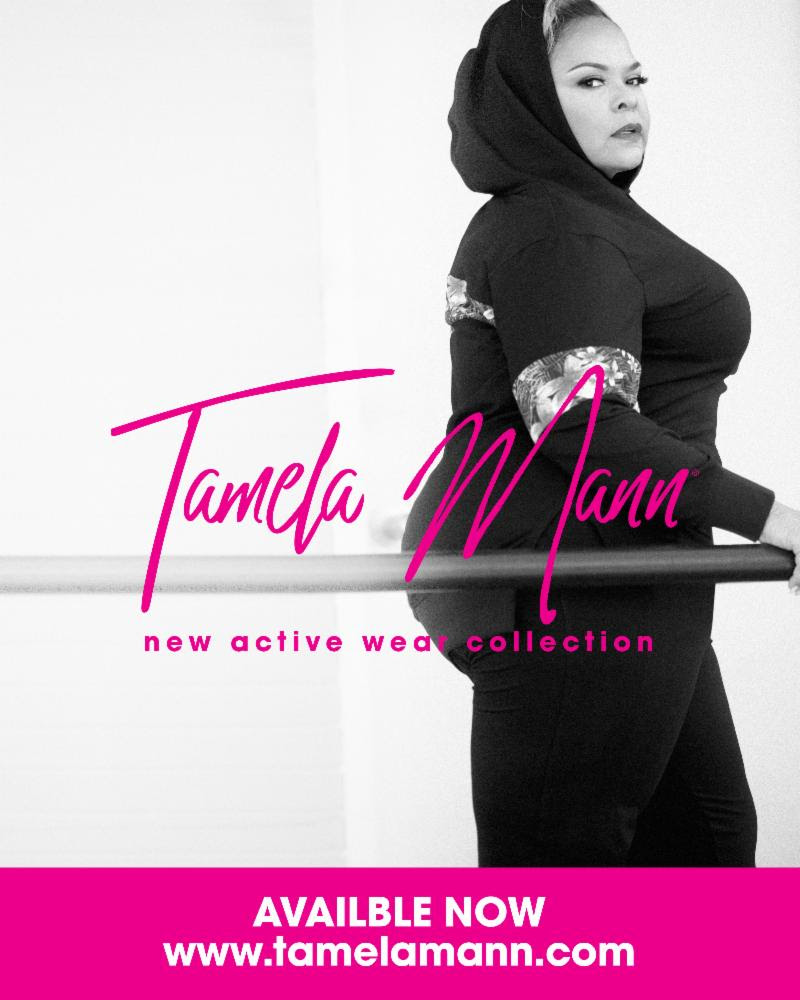 Grammy® Award-Winning Recording Artist Tamela Mann announces the launch of her women’s plus athleisure apparel, Tamela Mann Collection, which is available now for limited edition purchase online and hits retail stores in the Fall 2019.
“I chose to do this line for a number of reasons. The idea was actually birthed out of frustration; I would go shopping and most of the selections for plus-sized women were not as fashionable,” explained Tamela. “I wanted to create a line that would look good on curvy women as well as make them feel beautiful, sexy, and comfortable at the same time.”
The limited edition launch of the sporty Tamela Mann Collection includes six super-chic styles of jackets, tops, and bottoms in shades of grey, black and black and white floral print. Many brands include plus-size offerings, but very few are devoted to making an athleisure line for women that help them express their unique style and flatter their shape,as is the Tamela Mann Collection.
“I’m starting with athleisure wear because I know how important it is to women to have athletic gear functional enough to wear during a workout that seamlessly transitions to a stylish look perfect for running errands afterwards,” said Tamela. “The fit and quality of the garments are at their best, and I am really excited to share the variety of styles and colors of my first collection.”
ABOUT THE TAMELA MANN COLLECTION
The Tamela Mann Collection is an athleisure clothing line from Grammy® Award-Winning Recording Artist Tamela Mann. Tamela is an on-the-go mom, wife, entertainer, and entrepreneur who created a collection that not only brings together her personality and style, but most importantly met her fit and comfort expectations on a daily basis. The limited edition launch of the Tamela Mann Collection, including six styles, is available online at www.tamelamann.com with the line hitting retail stores in the Fall 2019.
ABOUT TAMELA MANN
Tamela Mann is a Grammy® Award winner, three-time NAACP Image Award® winner, BET Award winner, Billboard Music Award winner, Stellar Gospel Music Award winner, and GMA Dove Award-winning singer, actress, songwriter, producer, and businesswoman. Tamela’s award-winning album Best Days debuted at No. 1 on multiple Billboard music sales charts and includes the No. 1, RIAA-Platinum certified single “Take Me to The King.” Tamela set a historic personal and industry record as the first Gospel lead artist in Billboard Gospel radio chart history to score three consecutive No. 1’s from an album. The string of hits includes “Take Me to The King,” “I Can Only Imagine,” and “This Place.” Tamela’s Billboard chart-topping fourth solo studio album One Way features the Billboard No.1 singles “God Provides” and “Change Me.” In 2017, Tamela broke the record for the most No. 1’s in the history of Billboard’s Gospel Airplay chart when “Change Me” became her sixth leader. Tamela co-stars with husband actor/comedian David in the hilarious TV comedy, Mann & Wife, and their family docu-series, The Manns. Together, the couple released their first joint album and memoir, Us Against The World: Our Secrets to Love, Marriage and Family, and were recently honored for the book with the NAACP Image Award for Best New Author. David and Tamela head up their independent entertainment company Tillymann Music Group.