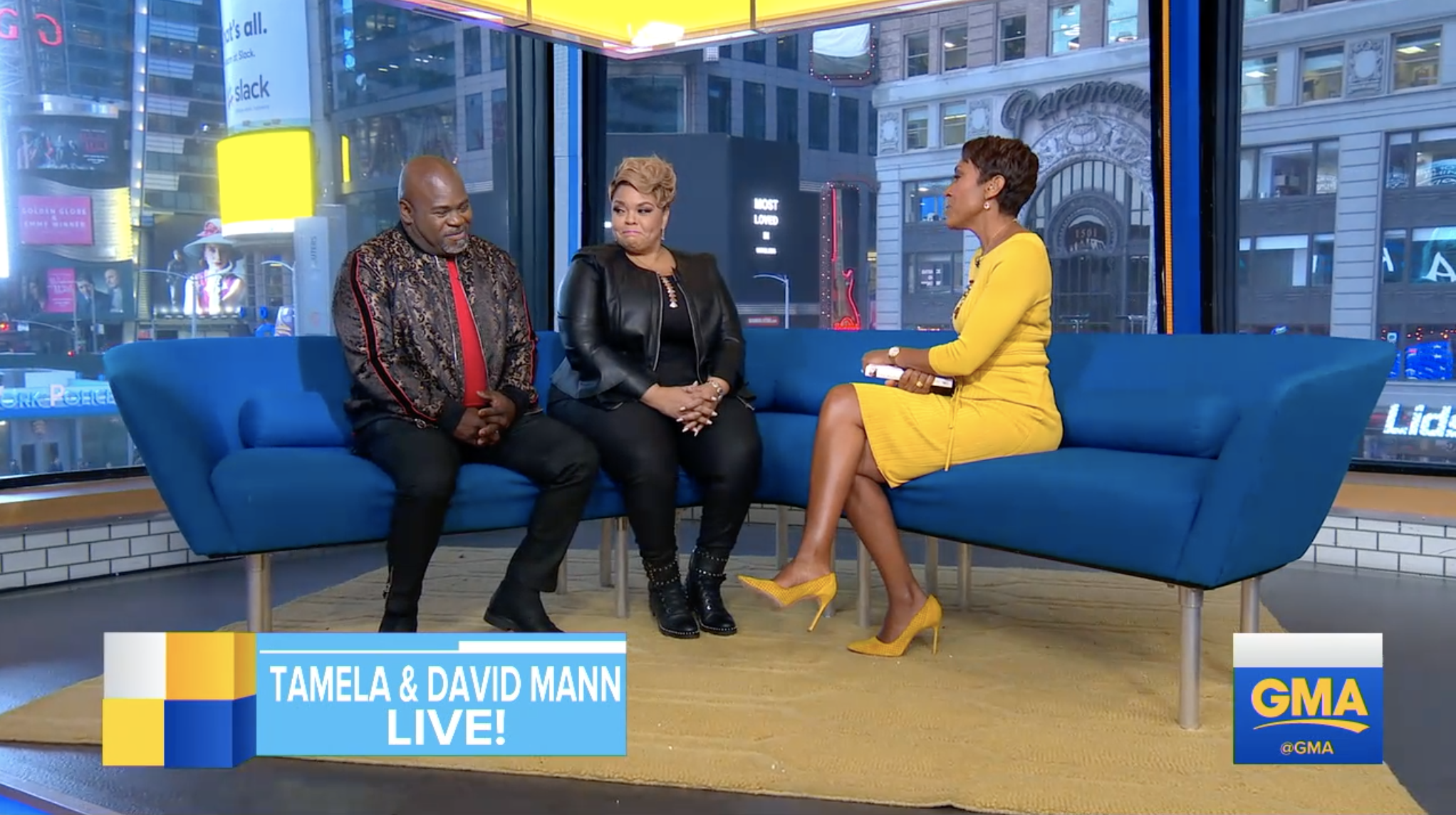 Today, January 14th, 2019, Grammy® Award-Winning Recording Artist Tamela Mann and her husband, NAACP Image Award-Winning Actor and Comedian David Mann, appeared on Good Morning America (GMA) talking about their new book Us Against the World: Our Secrets to Love, Marriage, and Family and joint album Us Against the World: The Love Project. In case you missed it, here is the full interview!
ABOUT DAVID MANN
Ingeniously funny and extraordinarily talented are understatements when it comes to David Mann, the multi-faceted, two-time NAACP Award-winning actor and comedian. A native of Texas, David masterfully showcases his God-given talents in a most dynamic and distinguished way. His musical and theatrical talents brilliantly epitomize ingenuity at its best. Along with his wife, Gospel singing sensation Tamela Mann, David co-stars in the hilarious TV comedy, Mann & Wife, and their family docu-series, The Manns. When David is not on set shooting, producing or directing, he brings his live comedy show to venues around the country playing to capacity crowds. David, together with Tamela, head up their independent entertainment company Tillymann Music Group.
ABOUT TAMELA MANN
Tamela Mann is a Grammy® Award winner, three-time NAACP Image Award® winner, BET Award winner, Billboard Music Award winner, Stellar Gospel Music Award winner, and GMA Dove Award-winning singer, actress, songwriter, producer, and businesswoman. Tamela’s award-winning album Best Days debuted at No. 1 on multiple Billboard music sales charts and includes the No. 1, RIAA-Platinum certified single “Take Me to The King.” Tamela set a historic personal and industry record as the first Gospel lead artist in Billboard Gospel radio chart history to score three consecutive No. 1’s from an album. The string of hits includes “Take Me to The King,” “I Can Only Imagine,” and “This Place.” Tamela’s Billboard chart-topping fourth solo studio album One Way features the Billboard No.1 singles “God Provides” and “Change Me.” In 2017, Tamela broke the record for the most No. 1’s in the history of Billboard’s Gospel Airplay chart when “Change Me” became her sixth leader. Tamela co-stars with husband actor/comedian David in the hilarious TV comedy, Mann & Wife, and their family docu-series, The Manns. Together, the couple heads up their independent entertainment company Tillymann Music Group.