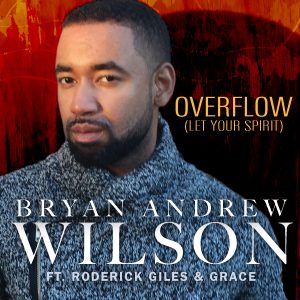 Spiritual soul singer Bryan Andrew Wilson is kicking the New Year off with a robust follow-up to last year’s introspective Top 15 Billboard Gospel Airplay hit “Turning Away.” The inspiring new worship song “Overflow” (Bryan’s Songs/CE Music) is knocking on the door of the Billboard Top 30 Gospel Airplay chart. It’s been #31 for the last three weeks and is currently at the top of the Billboard Gospel New & Active radio listing with 255 total plays and airplay detections on twenty-two of the forty-seven chart reporting stations with one new station add from KHVN in Dallas, TX.

The iTunes Store, Amazon MP3, Google Play and other major Digital Service Providers (DSP) will release the “Overflow” digital maxi-single on Friday, January 29th at 12:00AM. The package includes the regular track, an instrumental track and a performance track. The single closes with a bluesy, un-plugged live rendition of the 1963 Ben E. King classic “Stand By Me.” It was recorded live on WEFT 90.1 FM in Champaign, IL. The single set also features a colorful, five-page digital booklet that includes the “Overflow” lyrics, session credits and photos of Bryan Andrew Wilson.

Wilson was signed to the legendary Malaco Records label when he was ten years old and was produced by the likes of Walter Hawkins, Fredrick Knight, John P. Kee and Kirk Franklin. He enjoyed hits during the period such as “His Eye is on the Sparrow” (with Mississippi Children’s Choir), “Blessed Assurance” and “God Is On Your Side.” After a five-year break to graduate from college and attend graduate school, Wilson re-emerged in 2008 with the album “A Second Coming.” Wilson has since cultivated a new style as an adult artist and has charted with Top 40 songs such as “Faithful God,” “Show Me Your Glory,” “Everybody Clap Your Hands” and “Turning Away.”