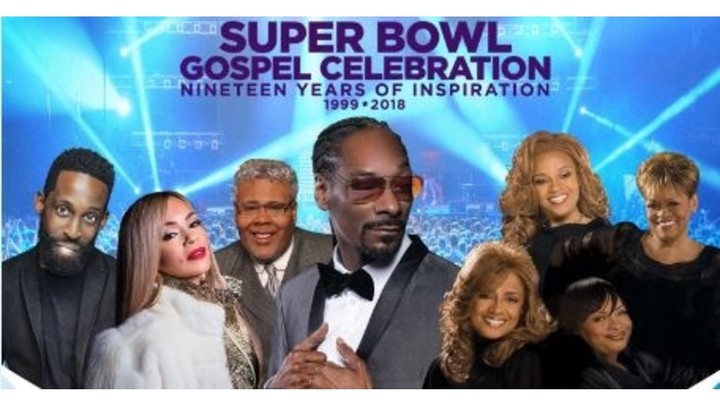 The NFL Sanctioned Super Bowl Gospel Celebration (SBGC) will kick-off Super Bowl 52 with its 19th Annual star-studded music jubilation live taping on a new day, Thursday, February 1, 2018, at the Benson Great Hall at Bethel University in St. Paul, Minnesota. The annual event joins together key NFL Players, top Gospel/Contemporary Christian and mainstream GRAMMY® Award-winning artists and special guests all on one stage to bring audiences an evening of uplifting music and inspirational messages. The 1-hr special will air on the BET for the fifth consecutive year on Saturday, February 3rd, 2018 at 11:00 p.m. ET.

This year’s concert will be hosted by NAACP Image Award®-nominated actress from HBO’s hit show Insecure Yvonne Orji, and gospel singer and star the OWN Network show The Book of John Gray Pastor John Gray.

Special honors will be presented during this year’s show, which include the first-ever Faith in Action Award honoring Seattle Seahawks’ Russell Wilson, and Arizona Cardinals’ Larry Fitzgerald receiving the Lifetime of Inspiration Award.

Celebrating their 10-year anniversary will be the NFL Players Choir, which features 40 current and former NFL players. The choir has become one of the most anticipated performances during Super Bowl Weekend. Musical Director Myron Butler will also be returning this year to lead the choir.

“We founded this event to bring even more inspiration and celebration to one of the biggest events of the year – the Super Bowl,” says Melanie Few-Harrison, Creator & Executive Producer of Super Bowl Gospel Celebration. “Each year we aim to touch lives in a meaningful way and make the Super Bowl Gospel Celebration bigger than the last with artists and special guests. We look forward to kicking off Super Bowl 52 in Minneapolis and making our mark as the best most uplifting event we’ve had in our 19-year history!”