Rev. Luther Barnes To Release First Choir Project In A Decade “The Favor Of God”

Gospel singer, songwriter, producer and musician, the Reverend Luther Barnes has been a stalwart presence on the gospel scene for over twenty years, scoring hit records with his choir, Red Budd Gospel Choir, and with his quartet, the Sunset Jubilaires, as well as solo hits and performances with the likes of Shirley Caesar, Kirk Franklin, John P. Kee, The Mighty Clouds of Joy and many others. The Favor Of God will be released on September 9, 2016 by Shanachie Entertainment in partnership with gospel label SRT Entertainment. The Favor Of God is the premiere of Luther Barnes with his new choir, The Restoration Worship Center Choir, and represents the first release in the strategic partnership between SRT Entertainment and Shanachie Entertainment. The new album demonstrates once again that Luther Barnes is one of the finest singers and songwriters in the gospel firmament, as shown by the lead single from the album, “God’s Grace,” which has already hit Top 30 at gospel radio.

Shanachie Entertainment has enjoyed success in the gospel arena with such outstanding artists as Kim Burrell, Take 6, Ann Nesby, Ted Winn, Evelyn Turrentine-Agee, Vicki Yohe, LaShaun Pace and others, as well as scoring hits with major R & B and contemporary jazz stars such as Mint Condition, Angie Stone, Will Downing, Euge Groove, Kim Waters and others.

“Though we’ve had success with gospel artists we really want to ramp up our presence in the gospel world, “ says Shanachie GM Randall Grass. “D.A. Johnson and SRT Entertainment bring to the table impressive expertise and relationships in gospel and we’re pleased to work with SRT to bring this magnificent new production by Luther Barnes.”

D.A. Johnson’s successful work in the business has included stints as GM of Light Records and Executive Director of the Gospel Division for The Malaco Music Group, as well as Stax legend Al Bell’s Bellmark group, which yielded hits from Prince (“The Most Beautiful Girl In The World”) and rap group Tag Team (“Whoomp! There It Is!”).

“Shanachie Entertainment is a venerable label that has garnered success in multiple genres of music. Infusing SRT’s extensive experience and knowledge of the gospel/inspirational marketplace along with Shanachie’s infrastructure should prove to be a recipe for success,” notes Johnson. “Luther Barnes is the ultimate musical trifecta.
He is a phenomenal producer, prolific songwriter and consummate artist; his smooth velvet voice is one of the most distinctive, recognizable voices in the history of recorded music, ranking him amongst the greatest balladeers of all time.”

The Favor Of God is a work of extraordinary quality, beautifully produced by Luther Barnes and up-and- coming producer, Derick Adams, at a level not often seen in these expedient times. A number of the album tracks feature live horns and strings and the voicings of the New Restoration Center Choir are marvelous.

“Although it has taken a minute for me to bring forth another musical project,” Luther says, “I believe the delayed process was nothing less than God’s perfect will.  The birthing of our church, Restoration Worship Center has brought with it new life and purpose which is extremely evident in these songs. The Restoration Worship Center Choir and musicians are awesome. We have truly been blessed by the Favor of God.”

With the release of The Favor Of God Luther Barnes launches a new phase in his music ministry. 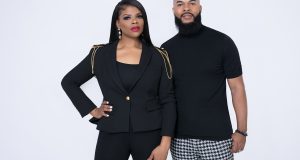