Rev. Dr. Emory Andrews & The Oxon Hill High School Choir, Celebrate A New Day with “The Storm Is Passing Over” 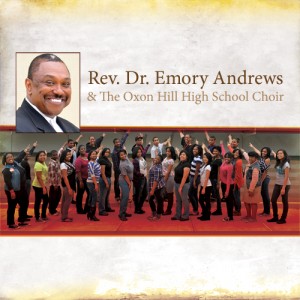 Stellar Award Winners, Rev. Dr. Emory Andrews & The Oxon Hill High School Choir, are among many in the D.C. area singing songs of praise at the departure of Hurricane Irene.  But the choir has another reason to sing “The Storm Is Passing Over”.  The familiar tune is the lead single of the group’s upcoming CD.  World-renowned and multiple award winners, the choir is prepping the release of their new project which features the talents of GRAMMY Award Nominee Gerald Albright on the song.  The full project containing the single drops on Tuesday, October 11, 2011.

After their recent Stellar Award win for Children’s Project of the Year, Rev. Dr. Andrews and the Oxon Hill High School Choir’s highly-anticipated third release features a very inspiring tune and one of the best known Negro Spirituals ever written. Penned by Charles Tindley, the son of slave parents, “The Storm Is Passing Over” is a reminder of the temporary nature of troubles in this life.  With beautiful harmonies and an emotive performance, the choir’s delivery reflects a contemporary gospel flavor.  Popular Jazz saxophonist Gerald Albright makes a guest appearance giving the rendition an even more soulful flair.
The self-titled project, recorded on the Sounds of Victory Ministries label headed by Stellar Award winner Phillip Carter, is the third from the choir, which at one time was recognized as the top in the nation.  The official CD Release Event for the new CD will be held on the release date, Tuesday, October 11, 2011, at the Oxon Hill Science and Technology High School in Oxon Hill, MD.  More details are to come on the CD Release Event.
The choir is headed by the renowned Rev. Dr. Emory Andrews, the Director of the Vocal Music Department and Choirs at Oxon Hill Science and Technology High School.  Educated at Florida A&M University (FAMU), Florida State University and National -Louis University, he’s taught at FAMU, Bowie State University and University of the District of Columbia.  The choir of approximately 130 voices has performed all over Prince George’s County, Maryland, and the Washington, D.C. metropolitan area.  The renowned group has also traveled the world including Central America, Italy and Nassau, Bahamas. For more information about the Oxon Hill High School Choir, log on to www.emoryandrews.com.