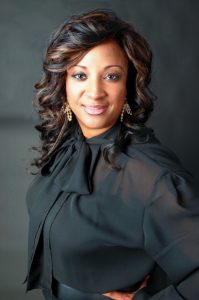 With a passion for praise and worship, Angie Davis is a new voice on the Gospel music scene.  The Springfield, IL resident is readying her debut, the brand new release of her EP, Take Me Deeper.  The 3-song musical offering showcases the worship artist in one spirited song after another.  Those in the Springfield area will be able to experience the tunes up close and personal at her release concert taking place on Saturday, November 14, 2015 at 7PM at the State House Inn Governors Ballroom (101 East Adams Street).  The free event is open to the public and will also feature the sounds of Dimensions from Kingdom Authority Ministries International.  For more information about the event, call217.720.6330 or e-mail angiedavisministries@gmail.com.
The EP, produced by Linton Weems, Jr., contains songs penned by Davis and Weems.  The first track, the uplifting “Nobody Like You” talks about the awesomeness of God and His miracle-working power.  Written by Weems, the track is high energy and high praise.  “Nobody Like You” flows seamlessly into Angie’s song, “Arise”.
“When I wrote ‘Arise’, I wanted believers to understand how much God wants them to come out of things that are binding them,” says Angie.  “God wants to free us from caves like depression, fear, insecurity, worry, and doubt.  This song reminds us that God wants us to rise up and not be encumbered by the chains the enemy wishes to bind us with”.
The final worship track on the Take Me Deeper EP is the title tune.  Angie, also the writer of “Take Me Deeper”, believes there is more of God that He wants us to experience.  She says, “I love ‘Take Me Deeper’ because it’s a love song to God.  I see the Lord as an iceberg.  There is so much more to Him than what we can see.  ‘Take Me Deeper’ beckons the Lord for more of Him”.
Although this is Angie’s debut release, she has been a lover of music since the age of 5.  As a child, she sang in the choir at Pleasant Grove Baptist Church.  It was at the age of 22 that she realized that God hadn’t just called her to music ministry, but she had been chosen to lead others into the presence of God.  Her first recording experience was with the praise team of Abundant Faith Christian Center on their CD, Behind The Veil, which was recorded in 2007; she was also featured on fellow artist Jamar Scott’s project in 2011.  She’s had the opportunity to sing in front of then Senator Barack Obama and she’s appeared on the Bobby Jones Gospel Show.
She believes this project will bless the body of Christ.  She says, “I believe God has given me a sound.  His sound has the power to heal the sick, deliver the lost and break chains.  This sound also can mend broken relationship and release those who are bound.  I believe this sound is for this season.  My prayer is that this sound from Heaven will invade the earth.”  For more information about Angie Davis, log on to www.angiedavisministries.com.  Connect with her on Facebook and Twitter.