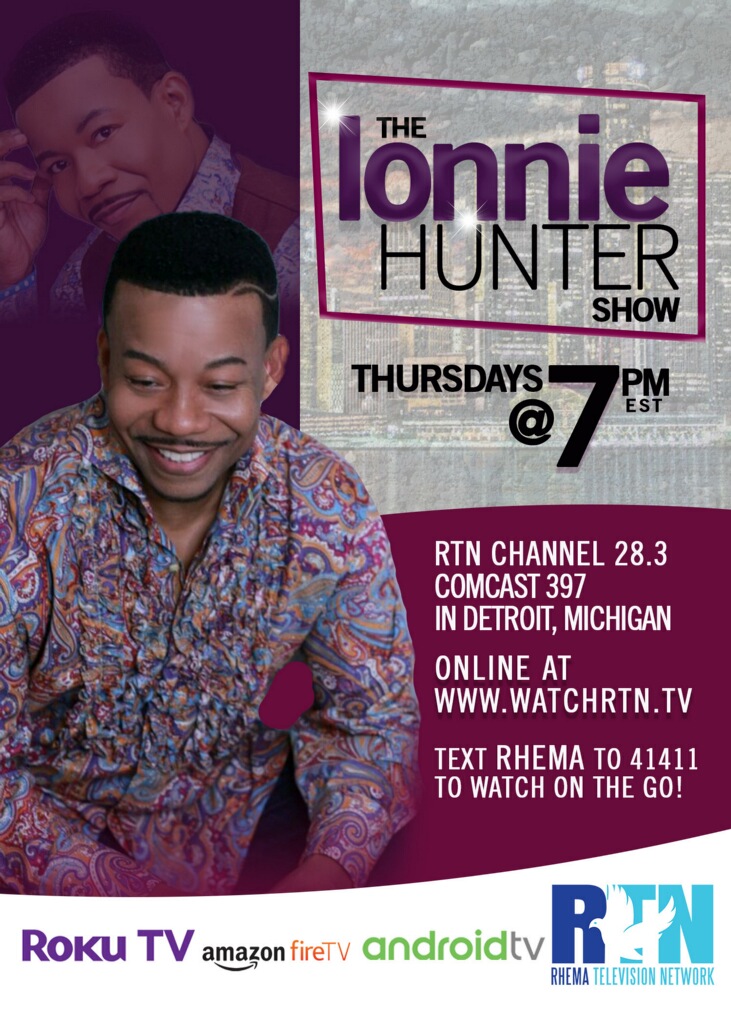 Whether you know him as the host of the syndicated Lonnie Hunter Morning Show on radio, or you’ve been blessed by his music, his humor and his ministry, he has left a mark on the hearts and minds of people across the nation. And believe it or not, he’s just getting started!

Launching on Thursday, May 21, 2020, viewers worldwide can enjoy the new Lonnie Hunter Show on The Rhema Television Network. Airing every Thursday night from 7 p.m. to 8 p.m. for twelve weeks, this state-of-the-art nighttime talk show highlights comedians, artists, authors and singers of all caliber. Interviewing the likes of John P. Kee, Ernest Pugh and Jamal Bryant, viewers will experience everything from laugh and love, right in the comfort of their own homes.

In addition to singing and comedy segments, Lonnie also hosts the hilarious segment, Clues & Categories, where male and female audience members compete to answer questions in record time. Season one of the show will air for twelve weeks, and Greg “Uncle G” Lyons serves alongside Lonnie as co-executive producer.

As an award-winning media personality for decades, Lonnie has been a recipient of numerous awards, i.e. The Stellar Award and The Gillette Business Man of the Year Award. Having served as the host and performer for the McDonald’s Inspiration Celebration Gospel Tour for over five years, Lonnie’s morning show can be heard on Reach Gospel Radio across the country Monday through Friday, 6 to 10 a.m. EST.

A veteran of the United States Air Force, Lonnie is a proud father of three and Pastor of Worship at Bethany Baptist Church in Lindenwold, New Jersey pastored by Bishop David G. Evans.

Founded in 2018, The Rhema Television Network, known as “The People’s Network” caters to the needs of its viewers worldwide. Founded by Bishop Eric and Lady Shenita L. Lloyd, RTN is based in Detroit, MI and can be seen by millions of viewers through RTN Channel 28.3, Comcast 397, Roku TV, Amazon FireTV and AndroidTV. For more information, visit www.watchrtn.tv or call 1.888.967.6777.