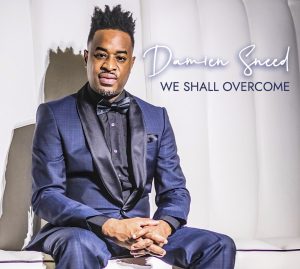 Acclaimed multi-genre recording artist Damien Sneed released a new full-length recording titled Damien Sneed: We Shall Overcome on LeChateau Earl Records on January 18th. The inspiring new project is currently available on all other digital retail outlets everywhere. A celebration of R&B classics, civil rights anthems, beloved spirituals, jazz compositions and more, the album arrives on the heels of the 35th Anniversary of Martin Luther King, Jr. Day, which was made a federal holiday in 1983.
Included among the album’s 18 tracks are Sneed’s unique arrangements of Billie Holiday’s “God Bless The Child,” pianist Billy Taylor’s “I Wish I Knew How It Would Feel To Be Free,” Duke Ellington’s “Come Sunday,” Marvin Gaye’s “What’s Going On,” Creedence Clearwater Revival’s “Proud Mary” (popularized by Ike & Tina Turner), Paul Simon’s “Bridge Over Troubled Water,” Bobby Timmons’ jazz standard “Moanin’” and the traditional title tune “We Shall Overcome.” Sneed also contributes an original tune called “I Dream A World,” inspired by the Langston Hughes poem.
“For years, American musical artists have used their platform to proclaim songs of protest and reconciliation in response to the many issues in our homes, schools, government, nation and the world abroad,” says Sneed. “My desire with this musical offering is to follow in the footsteps of the pantheon of great artists like Nina Simone, Aretha Franklin, Marvin Gaye, and others who melodically gave voice to those who otherwise wouldn’t have a voice.”
On Monday, January 21st, Sirius XM Satellite Radio will present Sneed’s new music via an in studio concert and interview on Kirk Franklin’s Praise (Channel 64) at 1:00 p.m. ET, with an encore performance at 5:00 p.m. ET.
Sneed recently signed with IMG Artists, who launched a 36-city North American tour, “We Shall Overcome: A Celebration of Dr. Martin Luther King, Jr.,” performing his brand of classical, jazz, and gospel music at concert halls and universities in the U.S. and Canada. The tour kicked off on Friday, January 11, 2019, at The Egg in Albany, NY, and will conclude on March 3 at the Gallo Center for the Arts in Modesto, CA.
Sneed is a pianist, organist, conductor, composer, producer, arranger, and arts educator. He has worked with jazz, classical, pop and R&B legends including Aretha Franklin, Wynton Marsalis, Jessye Norman, Diana Ross, Ashford & Simpson, Lawrence Brownlee and many others.
Sneed’s boutique label, LeChateau Earl Records, established in 2009, reflects his varied musical interests and features critically-acclaimed artists from classical, jazz, gospel and other musical genres. Previous recordings includeThe Three Sides of Damien Sneed: Classical, Jazz and Sanctified Soul (July 2018), Broken To Minister: The Deluxe Edition (March 2015), Spiritual Sketches (June 2013), and Introspections LIVE (January 2010).
Sneed is a recipient of the prestigious Sphinx Medal of Excellence, which is presented annually to emerging Black and Latino leaders in classical music. A graduate of John S. Davidson Fine Arts School in his hometown of Augusta, Ga., he earned a Bachelor of Music – Piano Performance from Howard University and a Master of Music in Music Technology: Scoring for Film and Multimedia from New York University.  Sneed is the founder and artistic director of the international vocal ensemble Chorale Le Chateau, and the founder of Le Chateau Earl Records. He was recently named a 2019 Artist-in-Residence at the Carr Center in Detroit, MI, along with Debbie Allen, George Shirley and Savion Glover, as well as Assistant Conductor, and Composer in Residence for the Houston Grand Opera.
Advertisements