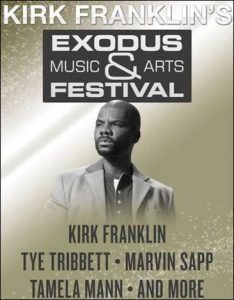 Iconic gospel artist Kirk Franklin is set to host and headline the inaugural Exodus Music & Arts Festival. This festival champions the genre of gospel music and is the first of its kind. The weekend-long event will take over the Pavilion at Toyota Music Factory over Memorial Day Weekend.

The upcoming festival will feature a spiritual lineup with performances by headlining act and host Kirk Franklin, Marvin Sapp, Tamela Mann, Tye Tribbett and more to be announced.

About Kirk Franklin: Since making his debut in the early 90s, Kirk Franklin has established himself as a trailblazer and icon in contemporary music. He first burst onto the world stage with Kirk Franklin & The Family, forever changing the look and sound of gospel music. Since then, Franklin has written and produced timeless, genre-bending music for himself and other artists earning numerous awards and accolades, including twelve GRAMMYs and forty-three Stellar Awards, and has sold over 10 million albums worldwide. With a career spanning over 25 years, he continues to break new ground and make indelible contributions to popular music.