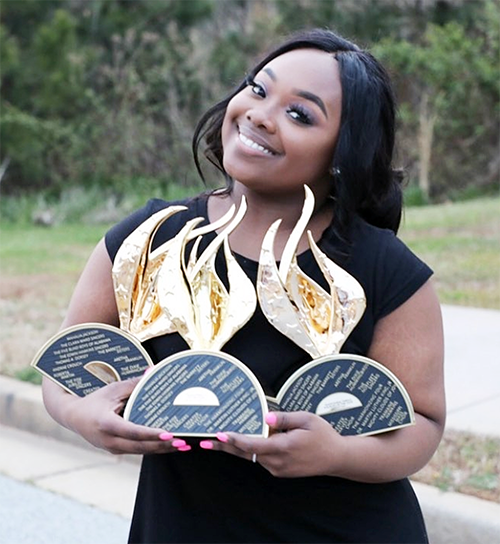 Jekalyn Carr – internationally acclaimed and award-winning artist/author/actress/speaker/entrepreneur – garnered 3 Stellar Awards during the ceremony held on Friday, March 29, 2019, in Las Vegas, NV.
The beloved young woman was awarded in the categories of Albertina Walker Female Vocalist of the Year, Traditional Female Vocalist of the Year and Traditional CD of the Year for the project One Nation Under God, and set the arena on fire during her performance of “It’s Yours.”
“First, it was a great honor to be nominated alongside the other amazingly talented and well-deserving ladies,” Jekalyn says. “To win…it was an Absolute honor!! Receiving an award of this caliber, named after the legend herself, Ms. Albertina Walker, is a memory I will always cherish.  I did not expect it, therefore, I feel blessed to know how others perceive my ministry. As God continues to grace me to do so, I will continue to carry on that sound of ministry mixed with the traditional feeling that the church loves so much and deliver the evolving sound of today. I grew up on the traditional sound and I can remember how powerful and life-changing it was then. My heritage means a lot to me and I’m grateful to embrace it and to be one of the chosen ones carrying such a mantle.”
Allen Carr – proud father, label president and producer – comments: “I am just elated of her accomplishments and her winning three Stellar Awards this week, shows what will happen if you put in the work and believe. Watching her grow from the beginning stages of her ministry and career, to where she is now, is amazing. This is and continues to be a great year of success for Jekalyn. She is such a humble being and I look forward to more of the great things that will come out of her.”
Independent artist, Carr, has taken the industry by storm with her rising success. Since her break-out single in 2013, “Greater Is Coming,” she has gone on to create two top producing gospel albums, One Nation Under God and The Life Project. Most recently, Carr has added author to already impressive résumé with the book, You Will Win.
Recently, the celebrated Carr accomplished a rare feat. Her latest single, “It’s Yours,” has held the No. 1 spot on the Billboard Gospel Airplay chart as well as the MEDIABASE Gospel chart for 8 CONSECUTIVE WEEKS!
The 34th Annual Stellar Gospel Music Awards will air on BET Network on Easter Sunday, April 21, 2019, at 7 PM ET / 6 PM CT.
ABOUT JEKALYN CARR:
GRAMMY® nominated and Dove Award winning artist, Jekalyn Carr, has been soaring to success since the beginning of her career at the tender age of 15.
As an independent artist, Carr has garnered both national and international reach with two No. 1 Billboard Top Gospel Albums, The Life Project and One Nation Under God, as well three No.1 Billboard Gospel Airplay songs and two No. 1 on Gospel Digital Song chart for, “You’re Bigger” and “You Will Win.” The song “You’re Bigger” also peaked at No. 33 on the Adult R&B Radio Airplay chart.
Jekalyn’s achievements have landed her collaborations with gospel legends Shirley Caesar and Dorothy Norwood and performances on GMA’s Dove Awards, OWN’s Greenleaf, BET’s “Joyful Noise,” Black Music Honors and The Triumph Awards. In addition, she was featured in a documentary, Rejoice and Shout alongside legends such as Smokey Robinson, Andrae Crouch, and Kirk Franklin.
As compelling as she is as a vocalist, she is equally as dynamic as an evangelist. This emerging artist’s national acclaim is evinced by the distinct honor of being named Jet Magazine’s Top Ten Faces You Need to Know and Ebony’s Power 100 list.
Jekalyn’s heartfelt ministry and songs touch all genres, young and old. Her message is, “you can be successful if you believe, pursue the vision, and most of all trust God.”