Home / Artists / Jekalyn Carr Unveils The Cd Cover Art For Her Forthcoming Cd, One Nation Under God; Shares Her Inspiration And Prayer For The Release

Jekalyn Carr Unveils The Cd Cover Art For Her Forthcoming Cd, One Nation Under God; Shares Her Inspiration And Prayer For The Release 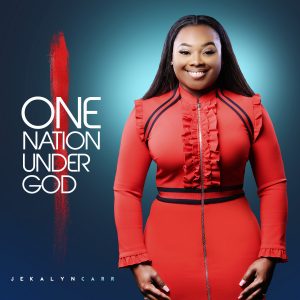 ONE NATION UNDER GOD, the highly anticipated, forthcoming album release from Jekalyn Carr, is a call for all of God’s people to unite, removing the limitations of race, religion, denomination, organization, location, gender, or class. With this new release, Carr addresses how God desires to see His people, and how we should see ourselves – as one united body of believers. God’s love for us all is consistent. The same love, grace, and mercy that He extends to one, He extends to all.

Carr’s passion has always been to inspire the people of God to live blessed and to walk in every promise that He has spoken over their lives. That is a very strong theme throughout One Nation Under God, as Carr focuses on corporate worship and spiritual community. She prays that this project helps to foster a global impact and remind believers that we are all connected. She states, “I feel compelled to reiterate that we, the people of God, are ONE body. No matter where we are, America, Africa, or Russia, we are all connected by the God we serve, and the grace that He has over our lives.”

One Nation Under God comes on the heels of Carr’s first live record, The Life Project, which has inspired millions and is considered by many to be her coming-of-age release. The Life Project featured a more mature Carr, and yielded many career milestones, such as her first #1 album, first #1 single (“You’re Bigger”), first Grammy nomination, first Billboard Award nominations, and first GMA Dove Award nomination.

One Nation Under God is already shaping up to pick up right where the successes of its predecessor left off. The lead single, “You Will Win,” was the #1 most-added single at Gospel radio for two consecutive weeks, is becoming a prophetic anthem for believers across the country, and has already begun a rapid ascent up the charts.

One Nation Under God will be available early 2018, and will coincide with the release of Carr’s literary debut – a collection of Carr’s most poignant and powerful exhortations, inspirational messages, pointers and strategies designed to promote a victorious life, in Christ – entitled You Will Win: Inspirational Strategies to Help You Overcome.