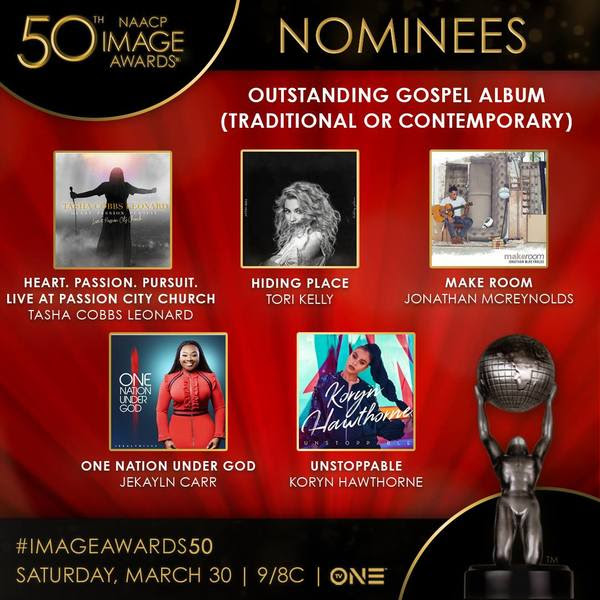 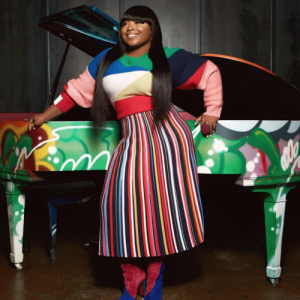 Nominations for the 50th NAACP Image Awards® were announced recently and Jekalyn Carr – multi-award winning Gospel artist, speaker, author, and entrepreneur – was honored to receive a nomination for her album, One Nation Under God. The project – produced by Allen Carr, Jekalyn’s father and Lunjeal Music Group president – was nominated in the Outstanding Gospel Album (Traditional or Contemporary) category.
Jekalyn says: “I am extremely grateful for EVERYTHING the Lord is blessing me to achieve. I’m honored to receive my first NAACP IMAGE Award nomination.  Thanks to NAACP for including me in such a great honor. I want to congratulate all of the nominees in which I’m nominated alongside.”
The album, One Nation Under God, along with Carr, have been enthusiastically recieved by fans and industry alike, producing hit songs, winning a GMA Dove Award for best Traditional Gospel Album and being nominated for five Stellar Awards and two GRAMMY Awards.
Independent artist, Carr, has taken the industry by storm with her rising success. Since her break-out single in 2015, “Greater Is Coming,” she has gone on to create two top producing gospel albums, One Nation Under God and The Life Project. Most recently, Carr has added author to already impressive résumé with book, You Will Win.
Recently, the celebrated Carr accomplished a rare feat. Her latest single, “It’s Yours,” hit the No. 1 spot on the Billboard Gospel Airplay chart as well as the MEDIABASE Gospel chart.
ABOUT JEKALYN CARR:
GRAMMY® nominated and Dove Award winning artist, Jekalyn Carr, has been soaring to success since the beginning of her career at the tender age of 15.
As an independent artist, Carr has garnered both national and international reach with a Billboard No. 1 Top Gospel Album, The Life Project, as well as No. 1 on Billboard Gospel Airplay chart and No. 1 on Gospel Digital Song chart for single, “You’re Bigger.” The song also peaked at No. 33 on the Adult R&B Radio Airplay chart.
Jekalyn’s achievements have landed her collaborations with gospel legends Shirley Caesar and Dorothy Norwood and performances on GMA’s Dove Awards, OWN’s Greenleaf, BET’s “Joyful Noise,” Black Music Honors and The Triumph Awards. In addition, she was featured in a documentary, Rejoice and Shout alongside legends such as: Smokey Robinson, Andrae Crouch, and Kirk Franklin.
As compelling as she is as a vocalist, she is equally as dynamic as an evangelist. This emerging artist’s national acclaim is evinced by the distinct honor of being named Jet Magazine’s Top Ten Faces You Need to Know and Ebony’s Power 100 list.
Jekalyn’s heartfelt ministry and songs touch all genres, young and old. Her message is, “you can be successful if you believe, pursue the vision, and most of all trust God.”