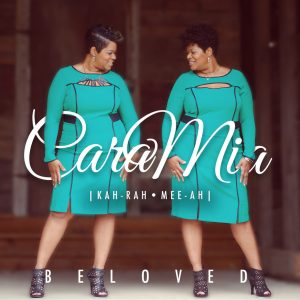 CaraMia (pronounced /Ka-rah-Mee-ah/) are talented sisters Shenée Johnson and Shenika Johnson who are almost identical in tone, yet distinguishable enough to produce the heavenliest of harmonies. Interpretations of their group name and the word CaraMia include “My Beloved” and “My Face.” For these Atlanta based identical twin worship leaders and recording artists, both meanings are relevant as they are God’s beloved daughters who seek to reflect his image in their own.

CaraMia’s musical journey includes recording with their alma mater, Florida A&M University (FAMU) on the highly acclaimed project TWINKIE CLARK PRESENTS: THE FLORDIA A&M GOSPEL CHOIR, opening up for artists such as John P. Kee and the New Life Community Choir while singing with a four-membered female gospel group known as One Acchord, and spreading the gospel through song in various churches and worship conferences throughout the United States.
CaraMia’s influence goes beyond music and impacts secondary education and women’s empowerment. They are both highly decorated educators in the Gwinnett County school system, one of the largest school systems in the state of Georgia. CaraMia are passionate advocates for women initiatives that promote a healthy mind, body, and spirit. As a result of their advocacy, the beautiful ladies of CaraMia were invited by Lane Bryant to endorse their #PlusIsEqual and #ImNoAngel campaigns which foster body diversity and healthy self-image.
“CaraMia’s  commitment to women everywhere was showcased in their support for the Lane Bryant Breast Cancer Awareness Campaign and the #PlusIsEqual Campaign.  Their passion to change the conversation around these important issues is so important and means so much, ” says Heather McGarry, Senior Marketing Manager, Lane Bryant Inc.
Under the management helm of G.Favored Entertainment Group CaraMia will look to advance their brand and take their ministry to new levels in an effort to encourage, inspire, and empower the world and will begin with a new single “Beloved”.
Listen To “Beloved”

[soundcloud] https://soundcloud.com/thegfavored/caramia-beloved [/soundcloud]
“Beloved” is available on all digital music outlets and was written by CaraMia along with co-writer Marquis Robinson and co-composer Grammy, Stellar and Dove nominated Philip Cornish (Isaac Carree, Musiq Soulchild, Raheem DeVaughn).  The single is produced by Vince Murphy, and vocal producers Minister David Trofort and Grammy nominated producer Roger Ryan (CeCe Winans, Wynonna Judd, Shirley Caesar).
CaraMia transcends ethnic, denominational, and generational boundaries, and audiences will be mesmerized at the complex simplicity of who they are…twin sisters, mothers, educators, best friends in ministry, and the truest blend… They are CaraMia!