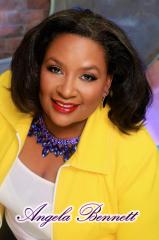 Angela Bennett is a welcomed addition to the cloud of witnesses hailing from the Gospel music enclave of Houston, Texas. The vocal powerhouse offers her testimony that the only foundation you can be sure of is Jesus in her solo single debut Rock Steady written by Bobby Sparks and James Mitchell and produced by Bobby Sparks and Mark Simmons.

Anointed with a unique and commanding gift to sing God’s praises, Bennett ‘s life has prepared her for a date with destiny.  Growing up in Houston as a third generation COGIC kid exposed her to the influences of her mom, the late Carole Allen Simmons and the musical melting pot found at the Greater Emmanuel Church of God In Christ where her grandfather served as pastor.  Music played an enormous part in the lives of Angela and her siblings as they were introduced to Gospel music luminaries that included Dr. Mattie Moss Clark, Bettye Ransom Nelson, Douglas Miller and Sara Jordan Powell.  Bennett’s musicality was evidenced in her youth, as she was hand selected by Shirley Joiner and Carl Preacher to join the famed Southeast Inspirational Choir where she was a featured soloist.  The doors of opportunity would swing wide for her as she broadened her horizons moving into musical theater which lead to a two-year stint in Japan.  Angela returned to the United States to join Windsor Village United Methodist Church under Pastor Kirby John Caldwell serving as a part of the church’s music ministry.

“I’m so excited for this new season”, states Bennett.  “Convinced that God orders our steps and knows how to get us to where we need to be, I can say that I am happy for the journey and excited for the places God is taking me. I am a yielded vessel ready for the Master’s use.“