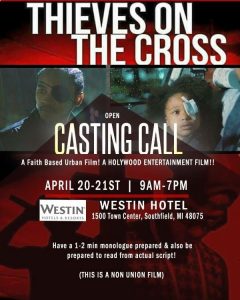 Open call auditions for Holywood Entertainment Films’ feature film, “Thieves On The Cross,” will take place at the Westin Hotel 1500 Town Ctr, in Southfield–Detroit on Friday, April 20 and Saturday, April 21 from 9 a.m. to 7 p.m. Many roles are open and will remain so until the end of auditions. Callbacks will be held Sunday, April 22. Film production is scheduled to commence on July 10 to August 10, 2018, in Michigan.

Director/Co-Creator Robert Watson along with Bill McKinney will be creating this faith based movie that gives us a tale of two childhood friends growing up in a broken environment. An adolescent ritual pact binds them together, but life soon pulls them apart. Later reunited, they are introduced to the intoxicating lure of the streets. On a fast track to the top of their game, they meet, Solomon Pride, who makes them an offer. He will hand them the Music Kingdom on a silver platter and in return, all they have to do is lead a generation to destruction, through a systematic diabolical plot.

Solomon Pride is soon confronted by his life-long rival, Officer Mims, who has looked out for the boys since childhood. As things rapidly progress for Kenny and Tyrone, they quickly come face to face with their troubled past and are forced to make some life altering choices.

“Thieves on the Cross” is an Epic Faith based tale, with a strong moral message, that will leave the audience captivated and challenged with the poignant question: ‘What would you do?’

Holywood Entertainment Films LLC, founded in 2018, is a Film and Television Production Company based in Los Angeles and Detroit producing faith based entertainment.

More information such as character descriptions and how to prepare for auditions can be found at https://www.rlhtalent.com/thievesonthecross.