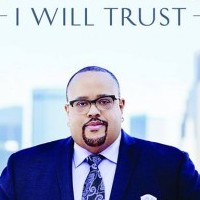 GRAMMY Award-winning gospel music legend Fred Hammond has released his much-anticipated new album I Will Trust to a #1 debut on the Christian/Gospel chart according to SoundScan.

Garnering acclaim amongst critics and fans, the chart-topping I Will Trust reflects Fred Hammond’s fresh perspective on faith and marks his most intimate album yet.  Hammond inspires fans with his perseverance and triumphant return to music and touring after undergoing a double knee surgery earlier this year.  Featuring the rousing Top 5 Gospel Radio hit single “I Will Trust” (feat. BreeAnn Hammond), Hammond has created a robust mix of soulful ballads and powerful praise with songs such as “Festival Of Praise,” “His Perfect Love,” “Take Me To The Water,” “It’s Only The Comforter,” “You Bless Me Over And Over,” and more.

Due to the overwhelming success of the recent 30-city Festival of Praise Tour, headliners Fred Hammond and label mate Donnie McClurkin will hit the road again together in 2015 for the second part of the tour.