Gospel producers Carl B. Phillips and Gregory G. Pearson unite to guide indie gospel artist through the process of recording and releasing music 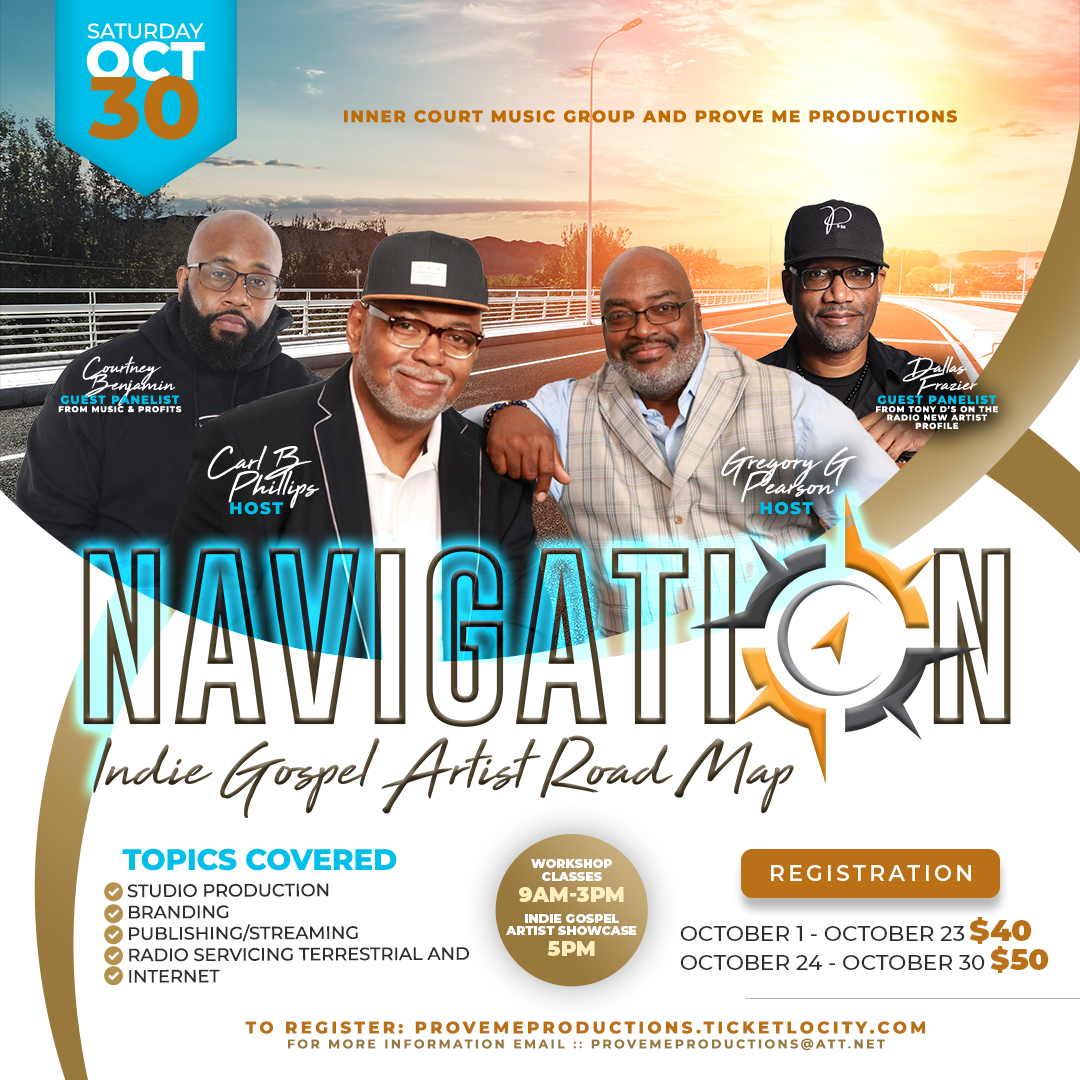 Gospel producers, songwriters and recording artists Carl B. Phillips and Gregory G. Pearson are uniting their resources to present “Navigation Indie Gospel Artist Road Map”, a one-day Industry Workshop and Indie Artist Showcase to be held on Saturday October 30, 2021 starting at 9:00 AM. The workshop will be held at “The MAG”, 21421 Hilltop Street, Suite 24, Southfield, MI.

Carl and Gregory, who also co-host the YouTube Show “In the Studio at Inner Court Live”, have been involved in gospel music for over 50 years each, most recently working with indie gospel artist beginning their journeys as recording artist.

The idea for “Navigation” was born out of conversations Carl had with other indie gospel artists about how to achieve certain goals as an indie artist. Carl stated, “since releasing my debut project in 2016, I have learned a lot. Those things I’ve learned, I want to share with others.”

“Navigation Indie Gospel Artist Road Map” will feature workshop classes on Production, Branding, Publishing, Streaming, and Radio Servicing.  Guest panelists for the Workshop include Music Publishing expert Courtney Benjamin, and Dallas A. Frazier, the host of the internationally syndicated radio show, “New Artist Profile with Tony D on the Radio”. The Workshop will conclude with an Indie Gospel Artist Showcase.

Carl B. Phillips is an International gospel-recording artist, songwriter and producer from Detroit, MI. His debut cd “Great Rain”, features the singles “Great Rain”, “I Know What God Did Last Summer” “Prove Me” and “Meeting In The Air”. In response to the pandemic and injustices, Carl released a remake and video of Stevie Wonder’s “Heaven Help Us All” in 2020.  Carl recently signed with IndieBlu for digital distribution of his latest release “Good Enough For God”. In addition to his own releases Carl co-wrote and co-produced singles by Freddi Rene and Kimberly Whitsett.

Carl has performed live in London, Los Angeles, Las Vegas, Nashville, Atlanta and Chicago. His television appearances include, TV-57 Atlanta Live, The Dorinda Show on TCT Network and Dr. Bobby Jones Presents on the Impact Network. Locally, Carl has performed in the Ferndale Front Porch Concert Series, the 2017 Michigan State Fair, the 2018 Detroit Music Weekend, the 2019 Detroit Music Awards. Carl performed during the 2019 UK Meets USA Gospel Summit and he is the co-host of the YouTube show “In The Studio At Inner Court Live”, a weekly show featuring indie artist interviews and performances.

Gregory G. Pearson is a multi-talented musician, producer, arranger and songwriter. He is the principal owner of The Inner Court Music Group, a multi-faceted music production and recording studio, which is considered one of the top Indie Artist recording studios in the Detroit area.

During his career, Greg has performed and / or recorded with many noted artists such as Anita Baker, Patti LaBelle, Aretha Franklin, Dorinda Clark Cole, Karen Clark Sheard, Kim Burrell and Rev. James Cleveland. In 2012 Greg was featured as a choir director in the move “Sparkle” starring Whitney Houston and Jordan Sparks.

In 2020 Greg celebrated 50 years in the music industry by releasing his first single “Your Deliverance” and a Christmas album “Christmas At Inner Court” both on the Inner Court Music Label. Greg is also the co-host of the YouTube show “In The Studio At Inner Court Live”, a weekly show featuring indie artist interviews and performances.