Home / Artists / Gospel Artist Debra M. Price Takes Her History of Abuse and Turns It Into A Musical Testimony On Her Sophomore Release, Transform Me: The Soul of a Woman

Gospel Artist Debra M. Price Takes Her History of Abuse and Turns It Into A Musical Testimony On Her Sophomore Release, Transform Me: The Soul of a Woman 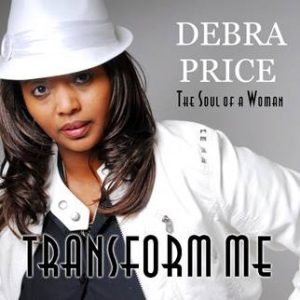 Stories of the mistreatment of women have been filling the headlines of newspapers for months now. The women we have heard about are only a small fraction of those who have been abused. Gospel artist Debra M. Price has her own story of abuse and triumph and she is using that testimony to uplift others who find themselves in similar situations. The Birmingham, Alabama, resident has been through harrowing experiences that no woman should ever have to go through, but she’s come out of it with hope and a song. The singer and songwriter delivers her testimony in a brand new release entitled, Transform Me: The Soul of A Woman.

Transform Me: The Soul of a Woman is a collection of songs conveying trust and love for God. During the CD, the songstress displays her musical gift through contemporary melodies and urban rhythms. Transform Me is Debra M. Price’s second release and the creation of the project was a healing process for the songstress. “This CD represents a new mindset for me,” says Price. It was that new mindset that was the impetus for the song, “Masterpiece”. “During times when I struggled with low self-esteem, I would look at myself in the mirror and say to myself, ‘You are God’s masterpiece’”, she recounts. “The Bible says that we are fearfully and wonderfully made. ‘Masterpiece’ is just one of the musical downloads that God gave me,” she shares. Fueled by that inspiration, she presents a total of nine songs on the CD. “Open Heaven” showcases mellow grooves and “Why”, a soothing ballad, will be relatable to anyone who has been perplexed by life’s questions. Other songs include “I Need You”, “U Set Me Apart” and “Memory Lane”.

Blessed with a gift to sing from childhood, she honed her talent in church. The Sylacauaga, Alabama, native is the 3rd oldest of 10 children. Her musically talented mother was the children’s vocal coach and required them to sing or play an instrument. Not called to be a musician, Debra regularly found herself as the group’s lead vocalist. She had aspirations of singing Aretha Franklin, but her mother encouraged her to find her own voice. She did and sung frequently. Her life took a turn away from music when she married at the age of 19. The decision would be a fateful one as she wed an abusive man, who would later become a pastor. After becoming pregnant with twins, during an argument he threw Debra against a wall and sat on her stomach, beating her causing her to go into premature labor. Ultimately, their daughter Angel ended up passing after three days. The incident was the last straw for Debra and three weeks after she buried her daughter, she left her husband. She ended up in a shelter for battered women and then later in transitional housing. Her daughter, Miracle, who was given a negative prognosis after Debra’s beating, is a thriving, healthy 24-year old.

The incident was an incredible learning process for Debra. “Since that time, God has given me a holy boldness,” she says. “I know that greater is He that is in me than he that’s in the world. One of my primary missions is to let women know that although we go through tests and trials, God has something greater. It took me a while to realize it, but now I know He came to give me life and life more abundantly.” Now remarried, she’s determined to help other women who find themselves in abusive relationships. She believes that she’s called to empower and encourage women, to help them understand they are not alone. She speaks to believers and non-believers at churches, conferences, concerts and any other opportunities she’s given. She inspires healing from depression, divorce, death and low self-esteem. She and her husband T-WON regularly team up with a missions group, Extended Hands Alliance, in Birmingham, AL assisting with feeding the homeless both physical and spiritual food. They usher in God’s presence with praise and worship and each Sunday morning at Linn Park. There are various ministers, including Debra or her husband T-WON, imparting the word of God to the homeless. Debra says, “We have so many hurting, broken people needing to be shown the love of Our Father God.” Debra’s mission focuses on helping those who need a touch from God, whether it’s through song, the preached word or volunteering to help the less fortunate.