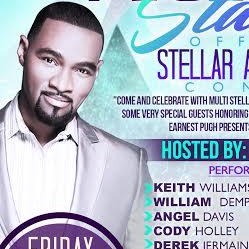 Set to kick off at 10 pm, the star-studded showcase shines as a salute to the label’s 2015 Stellar Award nomination for “Special Event CD of the Year” for their dynamic Billboard Top 5 album EARNEST PUGH PROUDLY PRESENTS GOSPEL’S RISING STARS. To be held at Las Vegas’ Ebenezer COGIC, this stellar event – sponsored by Bethesda COGIC Women’s Department – will beam a much deserved spotlight on some of the genre’s most promising acts with performances from BET’s “Sunday Best” finalist William Demps, gifted songstress Angel Davis, Titus Jackson, God’s Chosen, The Anointed Voices of Ford Memorial, Khare Hawkins, Brittney Wright, and John Tillery. Pugh and Bishop Andrew Ford will host the event.

Just a day after the Stellar nominee concert, Pugh and crew will be set to be recognized for their outstanding achievements in gospel music at the highly anticipated 30th Annual Stellar Awards, live at the Orleans Arena. There, EPM Music Group is not only celebrating a nod for “Special Event CD of the Year,” but also welcome new nominations in the “Traditional Male Vocalist of the Year” category for Pugh’s Billboard Top Gospel Albums chart #1 album, W.I.N. (WORSHIP IN NASSAU), as well as “Praise and Worship CD of the Year” for his critically acclaimed JUST WORSHIP EP.

These nominations are also joined by EPM’s prized Charles Butler & Trinity, who nabbed a nod in the “Contemporary Choir of the Year” category for the their debut album BETTER.